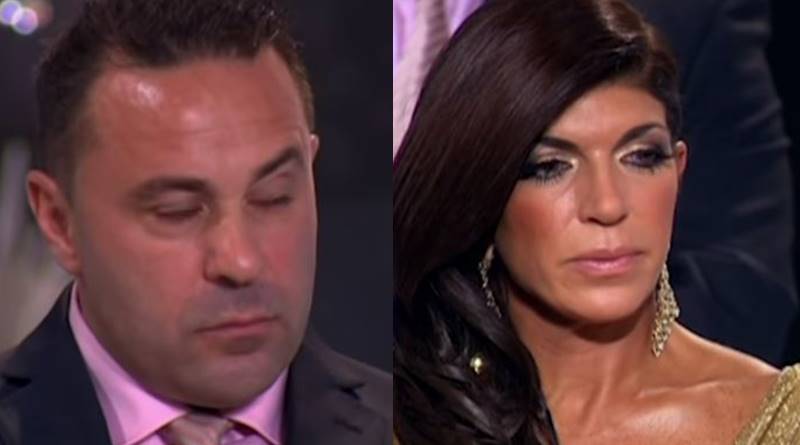 RHONJ fans know that after twenty years as a married couple, Teresa and Joe Giudice separated. Joe’s over in Italy, and Teresa still lives in the USA. They never really saw each other much in the last five years. They both spent time behind bars for wire fraud, and Joe’s appealing his deportation while in Italy. But, it turns out the wedding nearly never happened at all. Teresa wanted to call it off, and Joe was a reluctant groom.

After news came that the couple agreed on separation, fans urged Joe to somehow make an effort and “fix his marriage.” TV Shows Ace reported that could be a hard task. After all, he’s in Italy, and Teresa long refused to live there. The kids see him occasionally, but he’s getting on with his new life overseas. Seemingly accepting the situation, Joe nevertheless, comes over as a bit nostalgic for his days as Teresa’s husband.

We reported that Joe shared photos that went way back. Recall, they fell in love as teens. One photo showed them looking remarkably young, long before their daughters came along. In other posts, it certainly seems like the RHONJ star loved Teresa very much during his time with her. And yet, the wedding very nearly never happened at all, according to Teresa.

Teresa wanted out ahead of the wedding

People reported that Teresa nearly called off the wedding. It turned out that she hated the idea of signing a prenup. Just a week before the ceremony, she felt she didn’t wish to marry him. In fact, Joe had a relative who called off their wedding for the same reason. After all, at the time Teresa felt Joe really wasn’t from an affluent and wealthy family, so suspected his prenup was a trust issue. The outlet noted that the info came out on The Real Housewives of New Jersey after show this week.

Teresa said, “I just was hurt over it. He wasn’t a prenup kind of guy. Like, [if he had family money], then I could see him making me sign a prenup. … I would have no problem. I’d sign on the dotted line!” And the RHONJ star noted when they bought a property, she put up half of the funds. Teresa felt she’d never request something of a man. All her life, she bought and paid her own way. In the end, her mom persuaded her not to cancel the wedding. Meanwhile, Joe had a few second thoughts as well and seemed a reluctant groom.

It turned out that Teresa demanded the “no-cheating” clause, and never bothered reading the rest. Now, all these years later, it turns out she wasn’t the only one with some doubt. Joe said that he too didn’t feel over the moon about marrying. People noted that he said, “Like I even wanted to get married? No.”

What do you think about the fact that Teresa and Joe nearly never married? The RHONJ couple were divided over a prenup, and it turns out Joe was a bit of a reluctant groom, after all. Sound off your thoughts in the comments below.