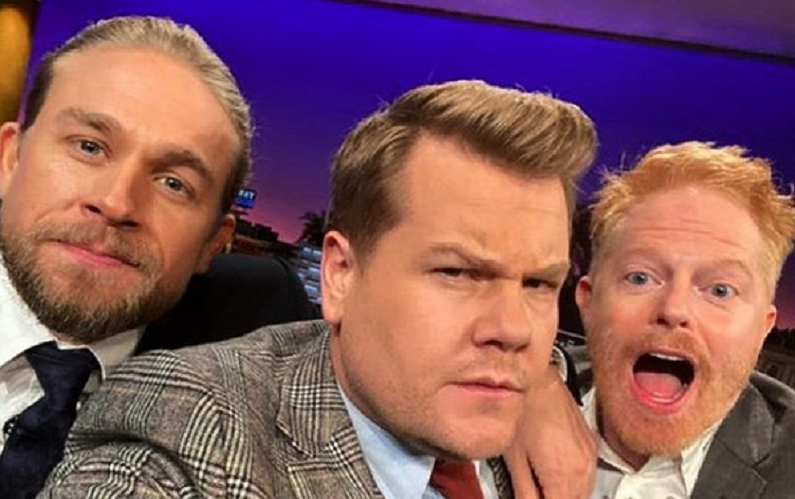 Jesse Tyler Ferguson has a lot to celebrate this year. The Modern Family star is kicking off 2020 with new beginnings. He made a shocking announcement on The Late Late Show with James Corden. He also has some other exciting things lined up for the year ahead. Read on to learn more.

Jesse Tyler Ferguson made an appearance on The Late Late Show with James Corden on Thursday, Jan. 23, as reported by CNN. That’s when he let it slip that he and his husband, Justin Mikita, are expecting their first child together. Corden was ecstatic over the news and so were fans. Ferguson joked that the only thing they know about their baby is that it’s “human.”

“Actually, this is something I haven’t even mentioned to anyone – if we could just keep it between the three of us and you all – but I’m actually expecting a baby in July with my husband,” Jesse Tyler Ferguson joked. “I’m very excited, but it feels like I’m 44 now, let’s get this thing going.”

Check out his announcement in the video below.

Learn about the happily married couple

Jesse Tyler Ferguson and Justin Mikita got married in 2013. And they look so happy together. The two are always sharing loving photos of themselves on social media. Ferguson and Mikita have always talked about their desire to start a family together. Now their dream is finally coming true. Their fans can’t wait to see the next journey in their lives.

Jesse Tyler Ferguson is releasing his own cookbook

Did you know that he has a food blog? He helped create the blog with writer and recipe developer Julie Tanous, as reported by House Beautiful. The blog is titled Julie and Jesse Cookbook and features recipes ranging from delicious donuts to healthy dishes. The last post was dated in 2019. Probably because the pair will be releasing their first ever cookbook together. Ferguson made the announcement on his Instagram page.

Eggcited for the launch of our 1st cookbook, @juliejessecook coming to a kitchen near you in 2021! Check out the @forbes article about it (link in bio) and make sure you go to our blog www.julieandjessecook.com for our latest adventures in the kitchen, past recipes, and subscribe to our email list to stay up to date! #julieandjesse

Embarking on a new television project

House Beautiful also reported that the actor will take on a new project. You’ll get to see more of him on your television screen thanks to his new show Extreme Makeover: Home Edition. Since Ferguson has an interest in philanthropy, he wants to give back to others and give them the house of their dreams.

dad coming thru to fix all your problems… 🧰 🛠

Sounds like Jesse Tyler Ferguson has a lot of new things going on his life. We wish him and Justin Mikita the best of luck.

Extreme Makeover: Home Edition will premiere on Sunday, Feb. 17 on HGTV at 9:00 p.m. Modern Family airs on Wednesday nights at 9:00 p.m. on ABC.

What are your thoughts on his new projects? Sound off below in the comments section.