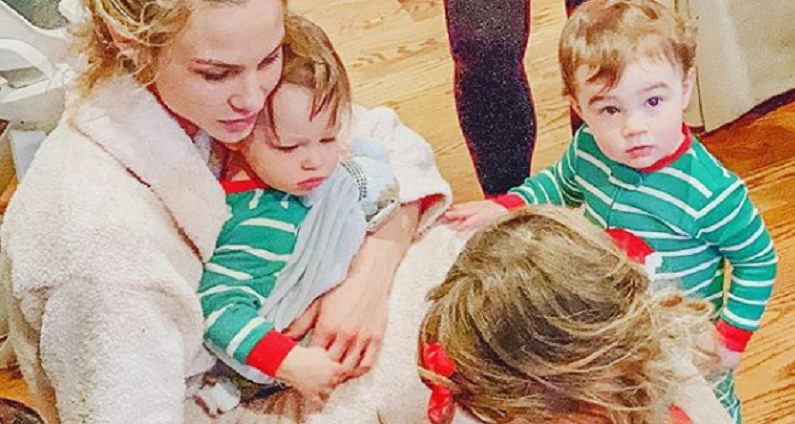 Meghan King Edmonds has been opening up a lot lately. As TV Shows Ace previously reported, the RHOC alum has talked about everything from threesomes to her son’s therapy. And she’s not done talking anytime soon. The former Bravo star just revealed that she has four frozen embryos leftover from her estranged husband Jim Edmonds.

Does that mean she wants to have more children? While Meghan has made it clear that she moved on from her ex-husband, she hasn’t ruled out the possibility of having anymore children. But she’s going through a messy divorce right now. The last thing she needs to think of is having another child.

The mother of three revealed that she’s unsure if her family is complete. She has been wanting to expand her family ever since the start. But there’s a lot of factors to consider. She already shares three young children with Jim Edmonds – Aspen, 3, and twin boys Hart and Hayes, 19 months. Meghan is aware that her plate is full.

“I don’t know if I’m done having kids,” she revealed on the Juicy Scoop podcast, as reported by People. “I’m 25; my kids are little. I could totally have another kid and I do love the idea of a nuclear family.”

🎉YOU GUYS, IT'S MY BIGGEST WORLDWIDE GIVEAWAY YET! And it’s not just for one winner but for two! The holidays are upon us and as I reflect on this past year, I am so thankful for all of the support my followers have given me this year. I wrote an exclusive piece for @bumoparent — a global community for modern parents about the struggles with giving Hart the help he needs, whether it means we travel as a family or have to spend some time apart. Their weekly bümoDIGEST has been so helpful to me and I'm happy to announce that I am hosting my biggest worldwide giveaway yet with them.⁣ As a thank you to my followers, we are giving away a $250 gift card to Amazon and a $500 Delta gift card to a random winner AND a tagged friend! (for a total value of $1500)⁣ ⁣ TO ENTER: ⁣ 1. Follow @bumoparent ⁣ 2. Tag a friend you want to win this with on this photo. (One comment/one tag per entry. Feel free to enter as many times as you want.) ⁣ ⁣ Giveaway ends 12/22. Winners will be messaged by 12/23.⁣ ⁣ P.S. For those of you who don’t know, @bumoparent is the ultimate modern parenting resource that delivers a weekly email (no spam, I promise) full of inspiring stories, parenting hacks, professional advice and so much more. This Sunday 12/22, my personal story and struggles as a parent will be sent to your inbox. Don’t miss out on what I wrote and sign up at http://www.hellobumo.com/ to receive my story in your inbox this weekend. #ad

The former Real Housewives of Orange County star has learned a lot about their marriage. As People reported, she regrets defending Jim, especially on the Bravo series. She was so enamored by him that she didn’t realize how poorly he was treating her. At first, Meghan called herself a “dumba**,” but then said that she wasn’t dumb, she thought she was being a good wife at the time.

“I wasn’t dumb, I knew what I saw, but I was defending him so much like any good spouse should defend,” Meghan said. “And that’s what I did. But I think I was brainwashing myself to really see what was going down.”

RHOC viewers remember well when Jim didn’t support Meghan or the show. The two were often seen fighting over Meghan’s desire to start a family and their long-distance relationship. The former MLB player spent six months out of the year to travel to St. Louis, often leaving Meghan behind in Orange County. Andy Cohen revealed during RHOC’s Season 10 reunion that fans thought Jim was “controlling” and “condescending” to Meghan.

Reveals what she wants in a man

Since Meghan learned so much from that marriage, she knows what she wants in a future boyfriend. She told her co-hosts Brooke Burke and Lila Darville on their Intimate Knowledge podcast that she doesn’t want a man who is as controlling as Jim was, according to E! News.

“I just a want a partner who is supporting me and isn’t jealous or trying to suppress,” Meghan revealed.

The television personality also said that she would like to date a man who is “loving you for who you are.”

It’s clear that she wants to move on from her marriage. But the tabloid headlines will keep them linked forever. Meghan has been looking forward to the new year and revealed on Instagram that she’s going to “manifest the s**t outta all the good stuff.” She added that the future is so bright she has to wear shades.

I’m gonna manifest the shit outta all the good stuff that’s gonna happen to me in 2020. Who’s with me? 🙋🏼‍♀️#futuresobrightigottawearshades

What are your thoughts on Meghan King Edmonds’ new podcast? Do you think she’s revealing too much about her marriage? Or, do you find her honesty refreshing? Sound off below in the comments section.