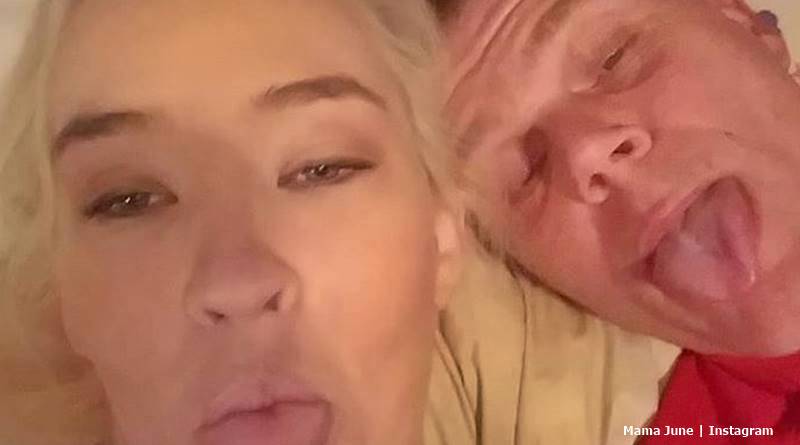 Mama June Shannon fans know that June’s been living as a motel-hopper and hitting the casinos for some months. It started after she sold her home in Georgia and went off with her boyfriend Geno to live in an RV. Recently, she allegedly got booted from a hotel for not fully settling a bill. And then, she sold a ring through a pawn shop. Is she running out of cash? Could that be why she reached out to her daughters on Instagram?

TV Shows Ace reported that June recently sold a diamond ring. Originally discovered by TMZ, that’s just one of a long line of what looks like a slide downhill. In our article, we speculated that if she’s running out of cash, perhaps she’d soon reach out to her daughters. In our report, we wrote, “One has to wonder if, when [her cash] finally runs out, Mama June may turn to her family again.” Well, now it looks like that prediction came true.

TMZ seems to be right on the trail of June Shannon. Once a successful star from her Mama June From Not to Hot show on WEtv, she slid downhill fast. Multiple reports from the outlet indicate she’s been living it up in hotels and casinos and looks a bit worse for wear. After not being able to pay a hotel bill fully, and getting tossed, she then sold a diamond ring for $1,500. Our article titled Mama June Shannon Looks In Dire Financial Straits covered many of the TMZ reports. Now, all of a sudden, seemingly cash strapped, June reached out to Pumpkin and Alana.

June loves and misses her daughters, she says

Breaking a seven-month silence on Instagram, on Thursday, June reached out to her daughters. Her followers were not surprised, as it looks like she’s cash-strapped now. Certainly, as we previously mentioned, we expected it. After she abandoned her 14-year-old daughter Alana, who went to live with her sister Pumpkin, she became estranged from them. In fact, on her Instagram, when a fan asked where Mama June is, Pumpkin told them to let her know when they find out.

But, it now looks like June runs shy of cash and reached out as we predicted. In her post, using what looks like an old photo for herself, June mentioned them. She captioned it with, “Well decided to get back at it.” Then she admitted, “im not saying im.perfect as everyday is a strugglr n some days i just want to disappear.” Then she noted that she and the kids “arent still seeing each other n its been very hard on all of u.” But, then she added, “but i hope one day that will cgange as i want them to know i miss n love them very much(sic).” 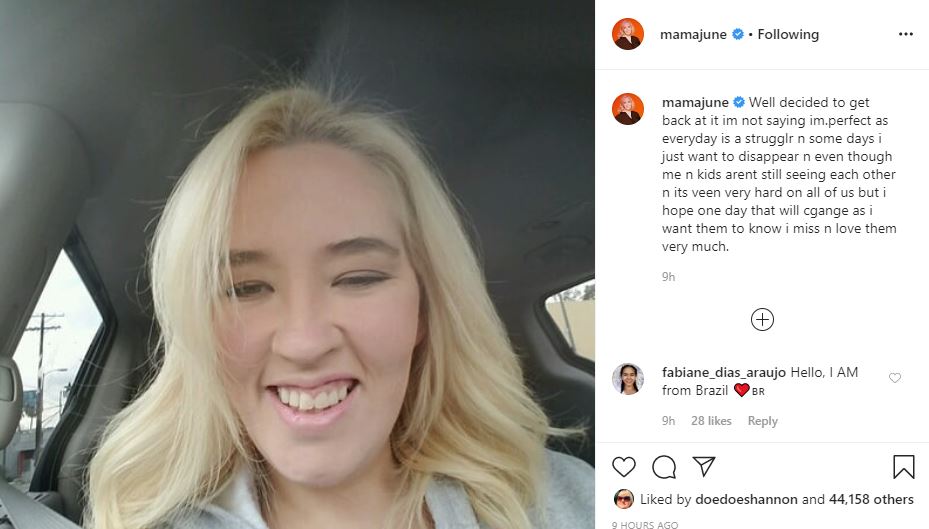 Doe Doe Shannon tried several times to get June to undergo an intervention and failed. But, she liked the post that June put on Instagram. Initially, June also shared a link to a fundraiser site where fans could pay her money for texts and photos. Later that was removed after critics slammed her. Some of them felt she just wanted money to buy more drugs. But, it’s possible that June finally had another flash of clarity. After all, fans saw that once before in the last season of the show.

While some critics think June just reaches out because she’s short of cash, it looks like Doe Doe at least might entertain some hope that she gets her life back together. What do you think? Did June reach out because her money runs low? Or, did she experience another moment of clarity? Sound off your thoughts in the comments below.