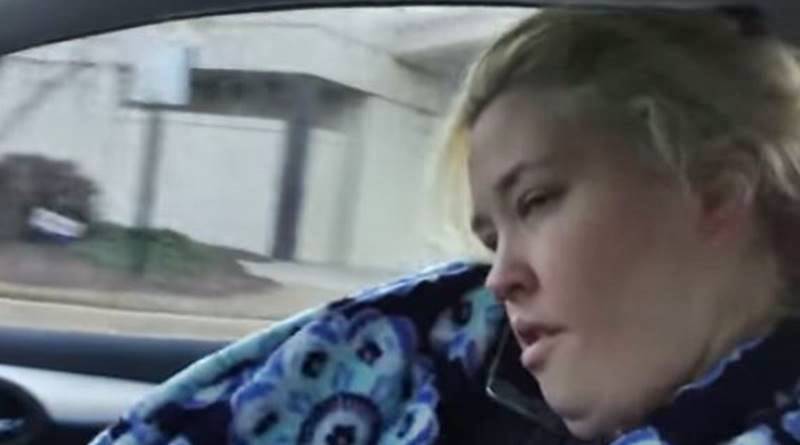 Mama June seems strapped for cash lately and reportedly recently sold a diamond ring through a pawn shop. Now, she made a return to Instagram for the first time since June 2019. There, she originally asked fans to contact her and gave a link to Collide.com. It’s a site where she can fundraise via the sale of text messages and photos. But, she removed that link after critics slammed her.

TV shows Ace reported that June sold a diamond ring to a pawn shop. She allegedly didn’t argue the price they gave her and accepted $1,500 for it. However it seemed uncertain at the time which ring it was, or even if it belonged to her. Nevertheless, it came soon after reports came out that she short-paid a hotel and was shown the door. At the time, we speculated that her funds run low. In fact, we also noted that attorneys who arranged the safeguarding of Honey Boo Boo’s money did the best thing possible.

TMZ brought out multiple reports over the months about the change of fortune for Mama June. Now a far cry from the successful Mama June: From Not To Hot star, she looks disheveled and under the weather. In a series of reports, fans heard she sold her home, bought an RV and hit the road with her boyfriend Geno. Subsequently, she got spotted drawing cash from an ATM and hanging around casinos. It certainly looked like she added gambling to her drug use. And, the last word from the outlet mentioned that she’s now selling things for cash.

Mama June fundraiser link on Instagram gets loads of critics

Mama June took to Instagram on Thursday night and told fans, “Well decided to get back at it im not saying im.perfect as everyday is a strugglr n some days i just want to disappear.” After mentioning her daughters, which is another story altogether, she then wrote, “here is a  way for you to speak directly to me.” Then, she put in a link to a site called collide.com. Katie Joy of Without A Crystal Ball grabbed a screenshot. And, it’s very interesting that shortly afterward, June removed that link from her post.

Katie looked into Collide and went through the process. On her YouTube video, Katie noticed that for a start, June’s photo looks old. After all, fans last saw her with broken teeth. In fact, she thinks the pic June used probably came from her days of success with WEtv. But, the feedback Katie gave was that on the site. Fans pay money to text or buy photos. She noted that essentially, Mama June took to Instagram to ask fans for cash.

Eight hours later, and well after the news emerged via Without A Crystal Ball, the link disappeared from June’s Instagram post. Plenty of critics had a go at her. But, some people really sent nice messages. As Katie noted, if people wish to spend money and send it her way, well, fans pretty much know what it’s likely to be spent on. But, each to their own. Some fans felt sorry for her and raised the fact that June’s legally blind. Others asked for compassion. But, others slammed her hard.

Bear in mind that Mama June refused a family intervention, walked away from her daughter Alana, and hit the road with Geno. It seems that she squandered her money on gambling, hotels, and probably drugs. In fact, she and Geno face charges on possession of drugs and paraphernalia. The news came out that her sister tried once more to reach out for another intervention, but June won’t hear of it. So, probably any money raised off the fundraiser site will be simply to continue her lifestyle, critics think.

A genuine intervention – simple as calling her sister

It looks like some people feel that if June really wants to help herself, it’s as simple as calling her sister and agreeing to an intervention. Raising funds off fans to continue her lifestyle seems a bit off to many people. One angry person said to June, “Hmm.. are you off the drugs? Or are you just on Insta to get more money to pay for ya drug habit?”

What do you think about Mama June sharing a fundraiser link and then removing it after loads of criticism? Do you think she’s getting desperate for cash now? Do you think those people who support her merely enable her? Sound off your thoughts in the comments below.