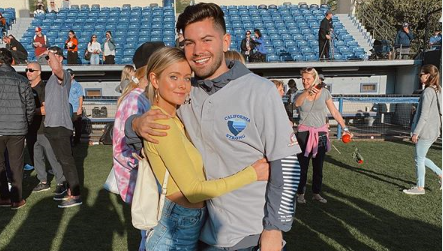 Hannah Godwin was a model before she went on The Bachelor and then Bachelor in Paradise. She’s half of one of the show’s favorite couples and getting plenty of work now. She’s still involved in the world of Bachelor Nation. Hannah Ann Sluss, who is currently competing for a place in Peter Weber’s heart, is a friend of hers.

During a Q & A with her fans one said, “you have no insecurities because you’re beautiful, I wish I looked like you.” Fans often think they truly know someone when they’ve watched them on television. As Hannah and others have said, the show can edit people to look a certain way.

“prune” giving us that perfect pout on this fine day / #modearoundtheglobe

Hannah Godwin Shares She Has Insecurities

Hannah Godwin responded to them that it wasn’t the truth. She stated according to The Cheat Sheet ever since gaining fame, she’s been criticized a lot more. She said there are tons of negative comments about her out there.

To the fan’s comment she had no insecurities, she said that was false and that she has plenty. Godwin said, “I’m constantly working on them and working on my confidence, though, and I’m very grateful and thankful to have all these eyeballs on me and stuff, that’s cool. But like it adds a lot of pressure and makes me question.”

The Reality Star Second Guesses Herself

In a previous interview with the Mouthing Off podcast Hannah Godwin said she’s indecisive when communicating and always thinks someone is judging her. She said, “I second guess myself a lot.”

According to Life and Style, she’s also had to defend not being hot and heavy in public with her boyfriend Dylan Barbour. This is something she’s faced in the past with fans asking why she pulled away so quickly from a kiss. She asked her followers what assumptions they had about her. A fan said, “that you are head-over-heels for Dylan even though you aren’t into PDA as much.”

She replied saying, “I’m the most team Dylan in the world. She said, “it’s kinda crazy that I only post maybe one percent of the sweet things he does.” She went on to say he was rational and truly rocks. Hannah isn’t letting fans think she doesn’t care. The couple declared their love for each other and got engaged before they left Paradise. They are the only ones besides Caelynn Miller-Keyes and Dean Unglert still together.

Is Tammy Slaton Jealous Of Amy’s New Baby?
Is ‘When Calls The Heart’ Season 8 Setting Up For Lori Loughlin’s Return?
Tammy Slaton Has Major Breakthrough: Is She Done With Excuses?
Is ‘Seeking Sister Wife’ Going To Crossover ’90 Day Fiance’?
‘My 600-lb Life’ Update On David Bolton: Where Is He Now?