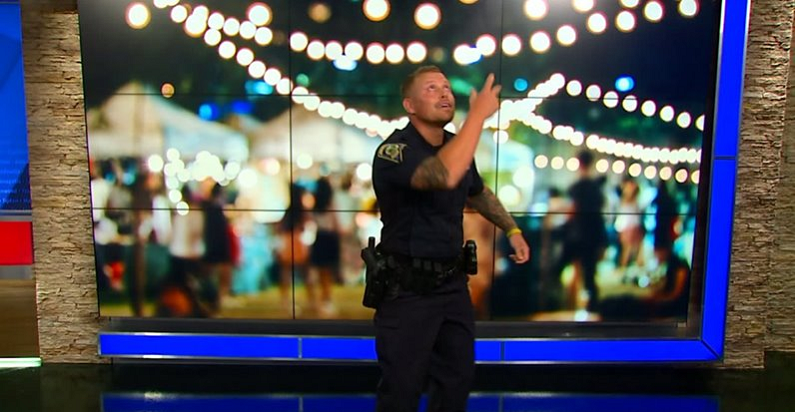 Live PD is the highest rated true crime drama on cable TV. Some of the officers on the series have become celebrities in their own right. As TV Shows Ace reported, deputy Garo Brown was popular with fans. They were disappointed to learn that he left the series to work behind the scenes as an investigator.

This show easily attracts millions of viewers each week. So, it comes as no surprise when one office became a viral sensation. Officer Charlie Kingery from the Lawrence Police Department is all about business when he patrols the streets. But behind the scenes, he’s got that dad sense of humor.

Kingery wanted to take on “The Git Up Challenge,” which is a country/hip-hop dance craze that’s been sweeping the nation, according to The Epoch Times. The Live PD officer was ready to tackle this new challenge. In an interview with WXIN in Indianapolis, he thought this video would only “get a few friends to like it and laugh about it.”

The video became a viral sensation. It racked up millions of views on social media sites like Facebook and Twitter. Check out the hilarious video for yourself below:

Kingery and colleagues in police departments across the nation are seen dancing along to Blanco Brown’s hit song. In the song, Brown challenges listeners to execute the lyrics in their own performance, which spawned the viral challenge. “The Git Up” landed in No. 14 on the Billboard Hot 100, which has become a surprise.

When Kingery learned of the challenged, he knew he had to take it on. No questions asked. He said in an interview with A&E that he was always a dancer at heart.

“I’ve been dancing since I was young, so I already knew about the song and the challenge.”

Not only has Kingery become a viral sensation, but he was also chosen as “Dancer of the Week” by The Rockettes in August 2019. Kingery said he wanted to do this video to show another side of himself. People assume that officers are stuffy and serious individuals. He wants to show people that they do have a fun side.

TV Shows Ace was one of the first to report that Live PD lost three counties, bringing the total count of 12 down to nine. Now it looks like the A&E show could lose two more counties. What does that mean for the future of the show?

As reported by the Indiana Public Media, Terra Haute is considering ending its contract with the A&T television show. Terre Haute Mayor Duke Bennett revealed that he learned from media reports that the NAACP is asking the city to end their contract with the cable network. The show has been following scenes from the Terre Haute police department.

According to a letter from the Terre Haute branch of the NAACP, the reality series exploits people at their most vulnerable and leads viewers to convict them guilty prematurely. Bennett doesn’t understand these claims. He’s heard nothing but praise for the show.

“We hope that it helps with recruiting, it also helps with transparency so people can see who watch the show can say, wow I didn’t realize these are the things they deal with all the time,” Bennett said.

He plans to meet with NAACP leaders to hear their concerns and to determine whether they will continue their Live PD contract.

This news comes after the Tulsa Police Department has been asked to their end contract with the program, as reported by Tulsa World. Mayor G.T. Bynum has been determining his decision to stay with the network. At one of the recent town hall discussions, he listened to a Tulsa resident who wants to cancel the city’s involvement with the series. Bynum disagrees and thinks the series is important to see the kind of cases that police officers deal with on a daily basis.

Chief Drew Diamond feels that “policing is not about entertainment.” He doesn’t like how the show uses police officers and its residents for entertainment value. Bynum now feels pressure from residents who believe the city should end its cooperation with the series.

If Live PD keeps losing contracts, then it could be the end of the series. And that would be bad news for its dedicated Live PD Nation viewers.