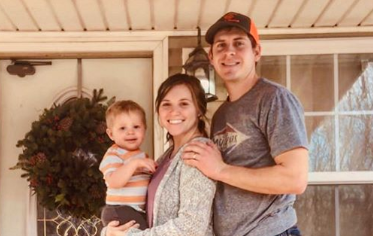 Joy-Anna Duggar excitedly shared some videos of her helping her husband Austin Forsyth at work on Tuesday! As the family took care of their son, Gideon for the day, the Counting On star gushed about the experience.

Joy-Anna Duggar Is A Working Girl At Heart!

“I’m a mess, but enjoying working outside with Austin Today!” she captioned the video of her on a construction site.

Joy-Anna told fans in her Instagram stories, “On the side, Austin does dozer work and clears land and stuff.”

She explains that he had been finishing up a job and needed a little extra help picking up sticks and running errands. That’s where she came in and got to go help him for the day. She explained that her family was keeping Gideon for the day.

Joy-Anna seemed so happy at the chance to work, she told fans that some people question why she enjoys it, but she just does! She loves working alongside her man, riding in big trucks, and helping run equipment. Being outside and doing things has always been something she’s loved. She says, “It’s kind of a highlight for me.”

In another photo she shared, Austin is seen with a chainsaw. Joy-Anna says he’s giving her some lessons with it.

The Duggar Women Love Working With Their Husbands

Joy-Anna Duggar isn’t the only woman in the family to enjoy working with her husband. The season premiere of Counting On in October 2019, Kendra, Joseph‘s wife, expressed that she was a little upset she didn’t get to work more.

She went on to explain that she had some expectations about their first year of marriage. She thought she would be able to make all the meals, clean the house, and go with Joseph to work. A lot of it had been planned out, like her joining him at work and them making meals every night.

According to OK! News, many of the Duggar women are stay-at-home moms, becoming an ongoing topic of discussion. Earlier this month, Jill Duggar snapped at a fan after they suggested she get a traditional job, in place of staying home.

Jill thanked the fan for their concern but reassured them at she loves staying at home with her boys. She understands that things can be crazy at times, but that’s going to happen no matter where she works. Their family takes time to re-evaluate their goals regularly, but everything has a reason and she’s content where she is now. She finished by reminding them that social media doesn’t reflect one’s entire life.

Some fans began to wonder if Abbie, John-David‘s wife, was going to resume her position as a nurse after giving birth in early January. She had her license transferred to Arkansas so she can work if she chooses to, she does plan to keep her license through continuing education hours. She mentioned she and John had looked at some job options but they hadn’t done anything yet. Abbie stepped away from her career shortly after getting engaged in July 2018.