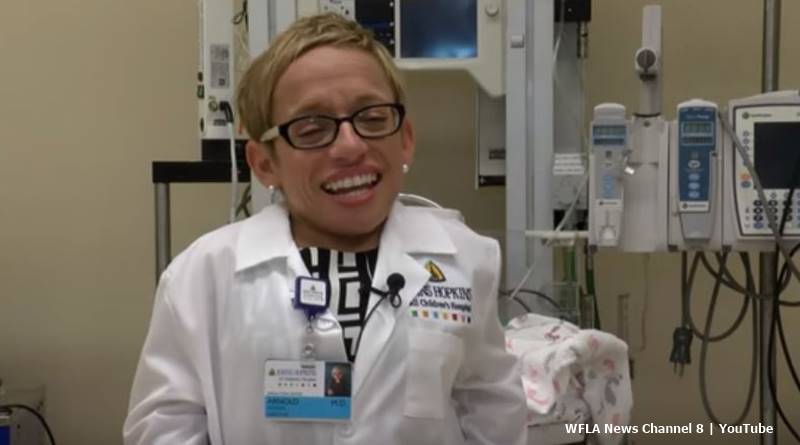 The Little Couple on TLC brings in plenty of fans to Dr. Jen Arnold’s Instagram. She works in neonatal medicine, is a mom to adopted kids Zoey and Will, and is a wife to Bill Klein. She’s also got a huge personality that fans glimpse on the show and on her social media. So very often, fans tend to forget how tiny she is. And, she posted a recent shot that really reminds them that she’s a very small little person.

The Little Couple – how small is Dr. Jen Arnold compared to other stars?

Fans of the TLC show know that Jen’s small. They also see other people on shows about little people. So they know that Zach Roloff, his dad Matt and his mom Amy are small. TLC fans see the show, 7 Little Johnstons. At four feet tall, Trent’s wife Amber towers over Dr. Jen. So too does Jen’s husband Bill Klein at the same height. Matt Roloff from LPBW also stands four feet tall. And, his wife Amy’s slightly taller than him.

TV Shows Ace often writes about Dr. Jen’s children Zoey and Will. It’s hard to say how tall they’ll grow. But, Will looks well on his way to being a tallish little person. Zoey might be smaller, but she also makes up for the height with personality. In fact, she’s got great ambitions and wants to be just like her mom one day. She hopes to become a doctor as well. And, there’s no reason why she shouldn’t. After all, every single little person fans see on shows like The Little Couple, reveals their determination to overcome any obstacles.

Taking to her Instagram on Tuesday, Dr. Jen shared a picture of her with other medical people in San Diego. They attended workshops about “PEARLS,” which is used in health care. Cheatsheet reminds us that Dr. Jen’s not just any old doctor. She’s also “well-known for her abilities as a neonatologist, or the medical care of newborn babies.” She joined the staff at Johns Hopkins in 2017 as an “assistant professor.” So, quite often fans see posts by Jen about her work.

In the photo that she shared, eight professionals stand shoulder to shoulder, with Jen in front. The mom from The Little Couple comes up to their chest or in some cases, close to their shoulders. So she doesn’t look all that small. That’s until you notice the chair she’s standing on. The chair probably boosted her height by about 1.5 to two feet taller than she is. In fact, if Jen Arnold stood next to Amy Roloff, Amy, also a little person would tower over her by one foot. That’s because Dr. Jen’s just three-foot, two inches tall (3’2″) according to Married Celebrity.

Amazing group of #systemsthinking #simulationists! Thanks to all that attended the workshop today on #PEARLS FOR Systems Integration #PSI #IMSH2020 @society_for_simulation #patientsafety #simsaveslives

Dr. Jen Arnold is proof that size simply doesn’t matter when it comes to courage. And with more people like her around, our health care system would certainly benefit. Most of these shows by TLC educate people about the challenges little people face. But, in Jen’s case, very often, fans think she educates them on how almost nothing impossible if you work hard for it, no matter the challenges.

What did you think of the photo that reminds fans just how tiny Dr. Jen Arnold is? Do you agree that her huge personality sometimes makes us forget that she’s a really small person? Sound off your thoughts in the comments below.