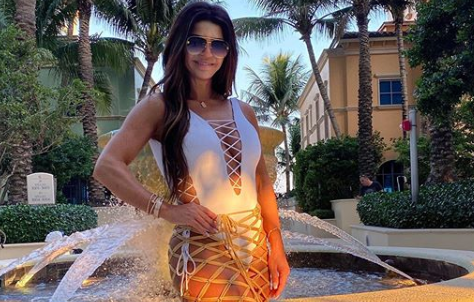 It appears Teresa Giudice is looking through some family photo albums.

The Sweet Photo Brough Back Some Memories For Teresa Giudice

The Real Housewives of New Jersey star shared one of her parents’ wedding pictures on Instagram Tuesday.

In the 1969 photo, Teresa’s late mother Antonia Gorga smiles in her wedding dress while holding a bouquet of flowers. Her father, Giacinto Gorga is standing next to his new bride in the photo.

Teresa captioned the photo, “My parents wedding photo.” She added the hashtag #dec271969, their wedding date.

Teresa’s mother passed away back in March 2017 after battling pneumonia at the age of 66.

“My mother, she fought really hard. But the pneumonia was too hard for her,” Teresa, 47, shared at the time. “My mom, she was just the most caring, loving mom ever. And she only cared about my brother, me, and my dad. She was an amazing woman. She was pretty amazing.”

After her passing, Giacinto moved in with Teresa Giudice and her four daughters, Gia, 19, Gabriella, 16, Milania, 15, and Audriana, 11, who’s father is Teresa’s estranged husband Joe Giudice.

Back in December of last year, it was confirmed that Joe and Teresa are separating after 20 years of marriage.

Teresa Still Blames Joe For Lost Time With Their Family

Prior to the announcement, the couple had been living apart for almost four years. Joe began his 41-month prison sentence for mail, wire, and bankruptcy fraud in March 2016. He was released from prison last year but was put into the custody of Immigration and Customs Enforcement. There, he fought to appeal a judge’s deportation order in Clinton County Correctional Center in Pennsylvania. Joe has lived in the United States since he was a child, though he ever obtained citizenship.

Joe had requested to go to Italy to await his third and final deportation appeal due to the rough conditions in the ICE facility.

Before Joe served his time, Teresa served just over 11-months for the same charges, released on December 23rd, 2015.

Teresa Giudice was on an episode of Watch What Happens Live with Andy Cohen back in October 2019. She said she continues to hold Joe accountable for the time she lost with her family while she was in prison.

According to People, Teresa claims there is no one else to blame, so she still blames him. She noted that she became very angry after she lost her mother. Before that happened, she wasn’t really angry, it all hit after that. She became more expressive and open about her feelings. She believes she shouldn’t be judged unless they’ve walked in her shoes. “Unless thy walk the walk, they don’t understand it.”