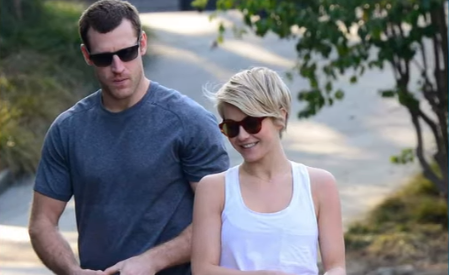 Brooks Laich and Julianne Hough‘s marriage has been seeing some issues. In response, the NHL star is focused on learning more about each other, including their sexuality.

Brooks Laich Makes A Confession About His Sexuality

Laich opened up on his podcast How Men Think with Gavin DeGraw on Monday. He made a confession about his sexuality, he doesn’t feel fully expressed in his true sexuality. He has now decided to take a “pleasure first” approach to his life.

Brooks went on to say one of his goals for this year is to explore and learn about sexuality.

“People think that sexuality is just the act of sex, of just having sex and there’s so much more to it. Here’s a question. This is an honest question for everybody in this room, and every single person listening: Are you fully 100 percent fully expressed in your true sexuality? With your partner? With everything? You could not imagine having a better sex life? Are you truly there? I’m not either. So that’s what one of my goals this year is to really dive into. So then we’re all essentially, that’s a state of suffering.”

He continued: “We’re not 10s of 10s. It doesn’t mean you’re the best performer. It just means, ‘Are you fully expressed?’ Do you even know who you are sexually? And I truly, to my core, do not. But I’m super excited about that journey to really learn about sexuality and also get better at the performance of it, but also just the understanding of who I am, who my wife is, that sort of dance.”

Earlier this month, it was confirmed that Laich and his wife, Julianne Hough were having marital troubles. It had been disclosed that the couple had been having issues for a few months.

Julianne’s independence and free spirit have been tough for Brooks and their marriage. The couple isn’t giving up just yet, but they are also not sharing these issues publicly.

On New Year’s Eve, Hough wasn’t wearing her ring while co-hosting NBC’s New Year’s Eve with Carson Daly, fans noticed. This was after Hough had posted a video of herself with the ring on Christmas Eve. On January 2nd, Laich posted a workout video, wearing his wedding band.

This could just be a phase, but it also might not. Regardless, addressing it publicly isn’t on the list for them right now. They want to handle this their way, not discussing their marriage is part of it. Many married couples have problems, they’re no different.

Soon after rumors of a split began circulating, the couple reunited at the airport says People. Laich was seen wearing his ring and Hough was seen without hers. A video of the couple reuniting showed Hough hopping out of her Tesla excitedly, going to greet Laich.

Brooks’ Sexuality Was News To Laich

On his podcast Monday, the former hockey player pondered how his new “pleasure first” approach was going to impact his day-to-day life.

“You are more loving, more kind, more patient, there’s more gratitude for everything,” Laich said. “Pleasure first is a new concept that I’m trying to explore in my life because it has not been. It’s been almost last in the course of my life.

Laich mentioned on the podcast that Julianne has also been open about her sexuality in the past. Last year she spoke with Women’s Health, expressing her concern that Laich wouldn’t understand her fluidity.

“I was connecting to the woman inside that doesn’t need anything, versus the little girl that looked to him to protect me,” she said. “I was like, ‘Is he going to love this version of me?’ But the more I dropped into my most authentic self, the more attracted he was to me.”

Recalled back to telling Laich, “You know I’m not straight right?”

According to Hough, he responded with a little bit of confusion. She expressed to him that she isn’t straight but she chose to be with him. She said they forged a more intimate relationship after that conversation.

Kids Look To Be In The Couple’s Future

On the podcast Monday, Laich also opened up about his desire to have kids. He said he wanted to be “an actively involved dad,” but he couldn’t be a stay-at-home dad.

“I couldn’t do that,” he said. “Being an actively involved dad but to just stay at home… I would love my kids but I think my soul would somewhat die doing that. I will go crazy if I don’t do something.”

He added that he’d want his children to see their parents as a unit and never hear about their past relationships.

Brooks Laich was asked to rate his happiness on a scale of one to ten, he said eight. He said he’s excited about retiring from hockey and heading into the next part of his life.

“In my life, there’s a lot of things I’m really working towards. I want to step into a new stage of my life,” he said. “There are things in my life I really want to improve and work on but, like, I f—ing love my life. There are good days and there’s bad but I love my life.”

Julianne Hough and Brooks Laich married in July of 2017, they got engaged two years prior. They dated for a year and a half before getting engaged. They’ve been open about trying to get pregnant through in vitro fertilization.

In 2018, the former Dancing With the Stars judge froze some of her eggs, as she lives with endometriosis.

“The commitment that she made to us having a family is something I’ll never forget,” Laich said back in July 2019 on his podcast.