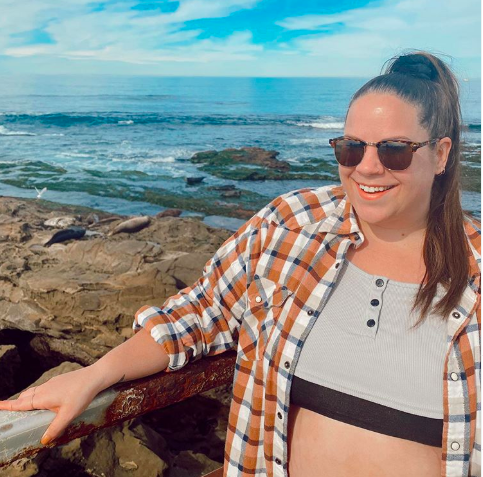 TLC’s My Big Fat Fabulous Life star, Whitney Way Thore, is known for sharing every moment of her exciting life with fans on social media. But, one of her most recent posts had fans worried about her love life.

Fans Worried After Seeing the Gram

According to Yahoo! Entertainment Whitney is currently on vacation in San Diego. While on vacation she shared a photo of herself lounging on her friend’s couch that fans considered to be revealing. The photo showed Whitney wearing only her underwear while getting some cuddles with her friend’s dog. The real kicker is that Whitney’s engagement ring was nowhere to be seen.

After noticing the missing ring her followers began to freak out. Fans were extremely worried that Whitney had broken up with her fiance Chase Severino.

Chase and Whitney got engaged in October 2019, but they did not reveal the big news until December. The couple got engaged during their trip to Paris. Whitney was able to keep the proposal under wraps, but the proposal was taped for My Big Fat Fabulous Life. The special moment should make for a great episode this season.

Thankfully, there is no need to worry! You can put those pitchforks down because Whitney took to Instagram to put the rumors to rest.

She changed the photo’s original caption from, “BRB, becoming a dog person. 🐶” to “y’all, I’m undressed in my friend’s house about to get massages. My two nice rings (including that one) are in the bathroom — CHIIIIIIIIIIIIILL!!.”

BRB, becoming a dog person. 🐶 I think Lola thinks I’m @nataliemeansnice. 😂 // EDIT: y’all, I’m undressed in my friend’s house about to get massages. My two nice rings (including that one) are in the bathroom — CHIIIIIIIIIIIIILL!!

The Fans Get Back on Track

The photo was merely meant to be fun. Luckily, it wouldn’t be long until her followers were back on her side. Shortly after Thore set the record straight, her fans were back to defending her against internet trolls yet again.

While still in San Diego, Whitney posted a photo with the seals in La Jolla. But according to Yahoo! Entertainment one person felt the need to leave a rude comment about her outfit, which showed off her midriff.

The troll wrote, “I get this whole body confidence movement but do you think this is actually appropriate to wear out in public? I mean even as a fit person I wouldnt wear that out.” This resulted in over 150 replies being thrown at the person. What can we say besides don’t mess with the Big Fat Fab Life fans.

Currently, My Big Fat Fabulous Life is in its seventh season. The show focuses on Whitney’s life as she tries to find her way in a world that judges people by their size. She strives to find happiness in her body, in dance, and in love. The entire premise of the show is Whitney no longer letting her fear of people’s judgment dictate the way she lives her life all while promoting body positivity.

Be sure to keep up with the latest episodes on TLC at 8pm on Tuesdays!