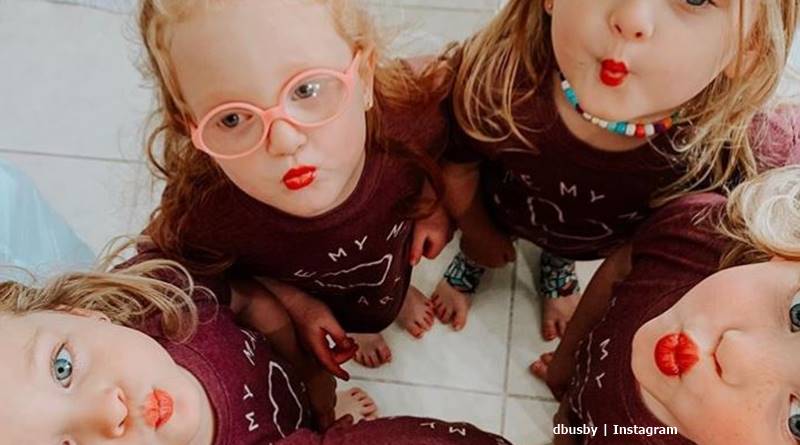 OutDaughtered fans heard that Danielle Busby got very ill with Flu B. Then, Adam told fans the five quints also got sick. He and Blayke avoided it, but he worried about going down. That’s because he’s been the home-carer. But, it looks like the flu crisis comes to an end. Danielle shared about the quints, flu,  and her makeup. But, she actually may have broken one of Adam’s rules about that.

OutDaughtered dad Adam stepped in while Danielle Busby had the flu

TV Shows Ace reported that Adam started drinking a lot of Emergenc-C to help prevent him from going down with the flu. On his Instagram, he later mentioned Elderberry gummies as well. Lots of fans gave him advice on what to take, and what not to take. Blayke managed to stay flu-free, but they made an effort to keep her away from the house as much as possible. However, the first warning signs of fever later confirmed that all five of the quints also got sick.

Nevertheless, it now looks like the flu crisis draws to a close in the OutDaughtered family. Danielle, sounding much better than before, shared about it on her Instagram. But, it looks like part of her feeling better resulted in her breaking some of Adams rules about no makeup. Recall that about six months back, fans were divided on Adam’s decision about the quints using makeup in the house. He worried they would crush it into the carpets.

Danielle says the crisis nears its end, quints get makeup

Over on her Instagram, Danielle shared a  picture of all of the quints with colored lips. She captioned her post with, “The Busbys Flu Party is slowly coming to an end … #yay.” So she decided “to clean out [her] makeup vanity today.” Then she added, “I had five little ones all excited about the lipglosses I was throwing out.” It’s a really cute picture, especially Hazel with her bright red lips. But, fans noted she may have broken Adam’s rule on no makeup in the house.

One fan noted though, that it pertained to the house they rented. Now in their own home, maybe worrying about the carpets is not such a big thing. At the time, Adam made his decision some critics felt he was annoying. But, others felt he had a good point.

Over on Reddit, fans got into a discussion about it. One supporter wrote, “I feel like Adam was rightfully concerned about them ruining the carpet with the makeup.” In fact, many of those commenters felt that Danielle really is a bit lax when it comes to the kids running wild and making a mess. ”

The Busbys Flu Party is slowly coming to an end … #yay. i decided to clean out my makeup vanity today and I had five little ones all excited about the lipglosses I was throwing out. 💋 #quintuplets #sisters #itsabuzzworld

Did Danielle break the no-makeup rule, or did things change?

Whether Adam freaked about them using makeup again, is not known. But, still, unless something changed in the Busby home, it looks like Danielle maybe broke the no-makeup rule by Adam. Mind you, the OutDaughtered dad might just be so relieved the crisis ended, that he overlooks it this time. What do you think? Sound off your thoughts in the comments below.