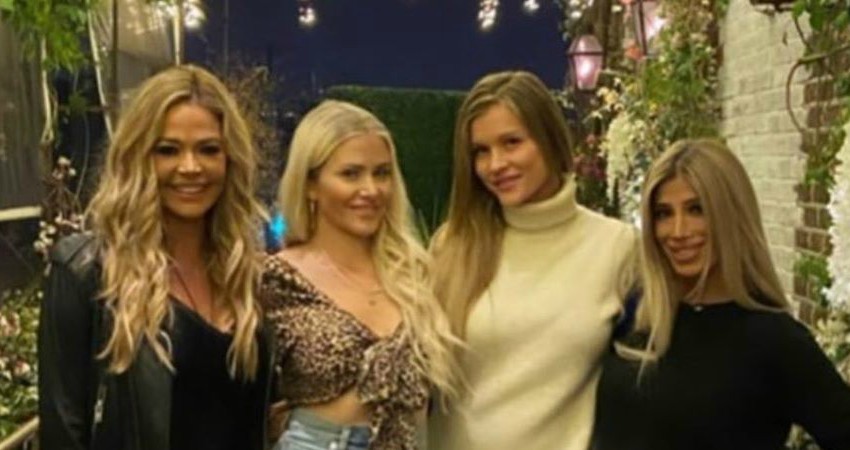 The Real Housewives of Beverly Hills star’s marriage may be on the rocks. Actress Denise Richards is at the center of a rumored hook-up with co-star Brandi Glanville. News of the alleged affair reportedly came as a shock to Denise’s husband.

Aaron Pyphers and Denise married in Malibu in 2018. The wedding was filmed for the show and attended by many of her RHOBH co-stars. The couple appeared happy on social media. TV Shows Ace reports that the couple were planning to move part-time to Montana.

However, the state of Denise’s marriage is regular gossip fodder as fans await Season 10 of RHOBH.

Earlier this month, the RHOBH star was in Spain for work. Hollywood Life reports that something was missing from Denise’s appearance. The Wild Things actress was photographed without her wedding ring.

The lack of a ring is prominent in the photo because her left hand is placed openly on her hip. However, Denise’s rep has a reason for the missing jewelry – swollen hands. Her rep said,

When she films, she doesn’t wear her ring or wears it on the other hand when she is traveling because her hand gets swollen.”

Her other hand isn’t completely visible in the photo. According to the rep, the ring is there, however. Denise and Aaron have a “happy marriage,” according to sources.

Once Denise returned home from her Spain trip, she grieved one of her dogs, Louie.

The Blast reports that Denise went to dinner with another Real Housewife earlier this week. The Real Housewives of Miami star Joanna Krupa was one of the three women who were spotted out with the RHOBH star.

Interestingly, Joanna sued former RHOBH star Brandi Glanville for defamation back in 2015. Her unlikely friendship with Denise set rumors ablaze that Denise was considering suing Brandi over allegations of an affair.

Despite the growing rumors of a “months-long” relationship with her co-star, Denise has kept quiet. Her rep denied the rumors on her behalf, but Denise has remained mum. One unexpected person who has defended the actress is Camille Grammer.

As fans know, Camille and Denise often argued during Season 9 of RHOBH. However, as TV Shows Ace reports, Camille defended her co-star against Lisa Rinna.

Brandi has alluded to the alleged affair many times on social media.

I am not lying about ANYTHING that I said on housewives and Im willing to take a lie detector test and let’s be clear I was not EVEN the aggressor!!!!

Camille recently assured fans that the hook-up “didn’t happen.” She further blames the rumors on Brandi trying to get her full-time role back on The Real Housewives of Beverly Hills.

It’s BS. It didn’t happen. Somebody is desperate for a diamond.

Both Brandi and Camille appear in Season 10 in part-time, guest roles.

The Real Housewives of Beverly Hills Season 10 will air sometime in 2020. Bravo exec Andy Cohen told fans to expect the trailer in about a month. Keep an eye on TV Shows Ace for news about the reality show’s return to Bravo.