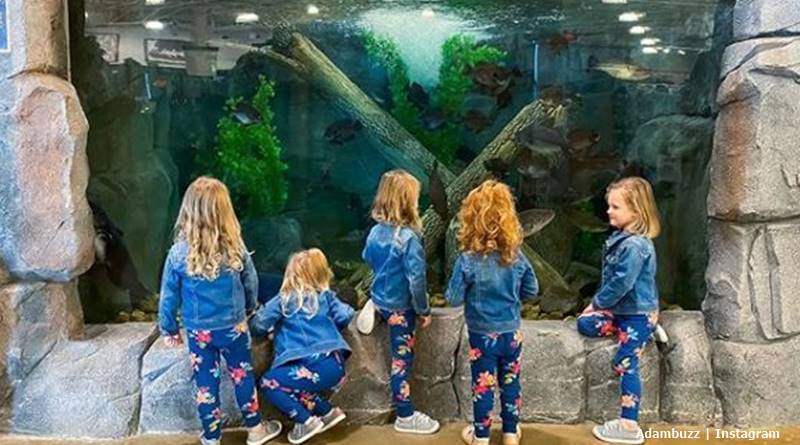 OutDaughtered Dad, Adam Busby returned to Instagram on Friday night to update his followers about the quints.  Danielle previously said that she fell really ill with Flu B. Then, Adam noted that he feared some of the quints were getting ill as well. He later took them to the doctor. And, the bad news is that all five of them now went down with it. Blayke seems okay so far, and Adam takes precautions so he doesn’t also fall ill.

OutDaughtered – Adam Busby holds out against the flu, quints go down

TV Shows Ace reported that Danielle Busby felt really ill, but health professionals only diagnosed the Flu B on the second visit. And, she just has to sit it out as initially, they gave her antibiotics. In the meantime, she worried about Adam as he’s like the caregiver right now.  We also noted that Adam planned on taking the kids to the doctor as well. They started getting a bit feverish, he said. Loads of people gave him advice, and a few got quite controversial trolling him about the use of vaccines and medications.

InTouch Weekly reported that Adam later came back to Instagram and said, “Last night was pretty rough.” He keeps his distance from Danielle, so slept on the couch. With the girls getting sick now, he also gets up and down for the little ones. Obviously, they need some care during the night. With five kids sick and Danielle also ill, Adam looked a bit rough on his Instagram Stories. Luckily, OutDaughtered big sister Blayke, so far, avoided the illness.

Quint Number 5 is down for the count. FLU count in the Busby house is up to 6 now. Parker started with fever last night, right before bed. Last night was pretty rough. I slept on the couch, to keep my distance from Danielle since she has it. Also,to wake up if any of the girls needed anything through night. They started waking up at around 2 and then every hour on. At one point Olivia started screaming because she was throwing up. I ran through the foyer to head up stairs and my feel wet air from under me at the base of the stairs. I think i pulled or tore something in my arm, trying to catch my fall on the banister. Night 1 down… we are all hurting in one way or another. Blayke is at school, but tomorrow is Saturday. Praying that we can keep her healthy. #outdaughtered #itsabuzzworld

Adam joked about TicTacs as medication, Blayke’s illness-free so far

On his Instagram Stories, Adam said that “all five” quints now fell ill. Blayke’s away at school, he noted. But they try and keep her away from the house as much as possible. Hopefully, she won’t get sick. So far, Adam managed to avoid falling ill and he talked about Elderberry gummies. The previous time he talked about medications, he told fans he used Emergen-C. Some fans trolled on him when a discussion arose that maybe he could ask his doctor about Tamiflu. Some people suggested it’s a preventative, and others said it’s totally toxic.

In the meantime, joking, he shared a picture of three bottles of TicTacs and said he’s taking them. In his Stories, the OutDaughtered dad said that he got plenty of DMs about it. Wearily, he noted, “It’s a joke.” One would assume by now, that fans would get it when he jokes. After all, he often plays around. But, many people took him seriously, it seems.

What do you think about Adam Busby trying so hard to remain flu-free as the quints and Danielle all fell sick at the same time? Sound off your thoughts in the comments below.