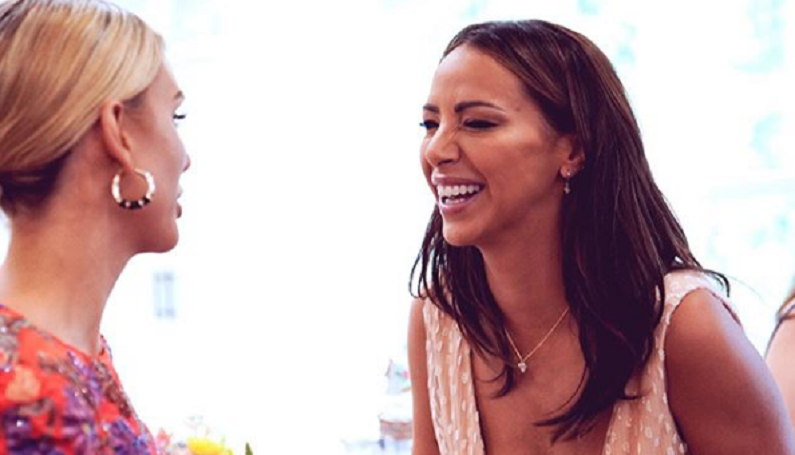 Kristen Doute is not dwelling on the past. She’s focused on the new things in her life. The Vanderpump Rules star no longer has her two best friends by her side, but that’s okay. She wants to remain positive. The reality star also confirmed that she’s “single” and “ready to mingle.”

Her relationship led to a falling out with her two best friends. The trio have been seen arguing on season 8 of Vanderpump Rules. And there’s more to come. But Kristen Doute is more focused and positive these days. She still has a lot of love for her old friends and doesn’t want any drama.

Back in September, she confirmed that she and her ex-boyfriend Brian Carter were “just friends” on Instagram. She’s ready to move on from her tumultuous relationship. During her interview on People TV’s Reality Check on Tuesday, Jan. 14, she revealed that she’s back on the market after her on-and-off relationship.

And on Tuesday night’s episode of Watch What Happens Live with Andy Cohen, she confirmed that she’s no longer with her infamous ex.

“We are definitely not together now,” she admitted. “[I’m] single. Ready to mingle.”

On the Bravo series, the couple had a troubled relationship ever since they met on the dating app Bumble in 2015. They first broke up in May 2019 during season 7 of Vanderpump Rules. But in the season 8 premiere, she admitted that she was still seeing Carter. The two even talked about moving into her new house together.

That caused many of her friends to claim that Doute was a “sugar mama” to her boyfriend. During her appearance on WWHL, she told Cohen that helped him “out a lot when we were together.”

The group, which consists of cast members Stassi Schroeder, Katie Maloney-Schwartz, and Kristen Doute, were always close even though they didn’t always get along. But the so-called WEHO Witches haven’t been as close on the new season. Kristen Doute didn’t even attend Schroeder and Beau Clark’s engagement party. In an interview with Hollywood Life, she was asked if she could see them becoming friends again.

“I never say never to any of that,” Doute admitted. “I love them both. My personal POV is I love them both. They’re still my sisters to me. I still have a lot of love. They asked for space, so I’m giving them space.”

She also revealed that she’s been speaking more to Maloney than Schroeder. Maloney reached out to her via text message on the same day that Doute released her new book. She admitted that Maloney is “kinder and more friendly than Stassi is.” Ouch.

Doesn’t understand their falling out

In an interview with Us Weekly, Kristen Doute admitted that she watches the latest episodes of Vanderpump Rules to see Schroeder and Maloney talk about her. She doesn’t understand why they grew apart. She hoped that her former besties would be more understanding since they’ve been through their share of relationship drama.

Kristen Doute was also asked if she finally sees what her friend saw in Carter. She admits that she was blinded by him. The television star said that she wished she would’ve gotten better advice than to be told “to go kick rocks.” It sounds like she’s in the dark like the rest of the viewers and she hopes to get more answers as season 8 plays out.

Kristen Doute’s new book He’s Making You Crazy is scheduled to be published in both hardcover and eBook in summer 2020. Meanwhile, Vanderpump Rules airs on Tuesday nights at 9 p.m. ET on Bravo.

What are your thoughts on Kristen Doute leaving Brian Carter? What do you think of her falling out with her friends? Sound off below in the comments section.