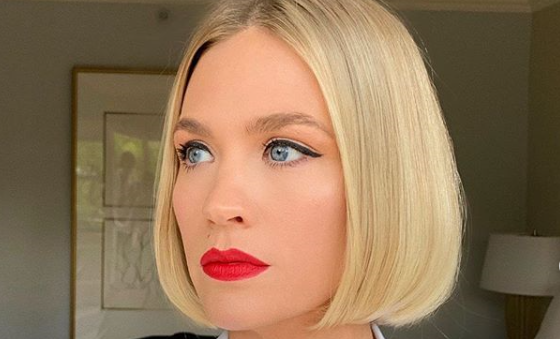 It seems Dax Shepard can get the truth out of anybody. That’s what happened on his podcast Armchair Expert with January Jones. She told him that she went on a couple of dates with Nick Viall of The Bachelor. She’d previously said they were just friends. Most likely at the time, January was just trying to keep things private to see if the dates would go anywhere.

She told Dax they met after he, “slid into her DMs.” Essentially, Jones got really into one of his seasons and bad-mouthed him in public. She stated, “I was just blasting that guy.” He wanted her to know he wasn’t as bad as she thought. He invited her out for coffee.

Its a GREAT day when you get to be on your favorite podcast @armchairexppod Thanks for having me @daxshepard and @mlpadman ❤️ out today!!

January Jones said she squealed when he invited her out for coffee. Immediately she said she was like, “I hate that guy.” Her sister was the one who told her she better meet him or she’d regret it.

They went to drinks and she spotted him before he spotted her. She had the desire to, “run up to him and wrap my legs around his waist, like on the show.” She didn’t and stated their first date was good. All she did was drill him about the show. One of the things he told her was the schtick they do when they’re getting out of the limo. She said, “the producers and handing them to them. And then I just felt bad for the people who get, like, the dolphin costume.”

What Attracted Her To Nick?

January Jones said Nick was completely different in person than the way he was portrayed on the show. She said despite being cast as the villain, “he had a bit of a brain, so there was something else there.” She was attracted to him off the show despite hating him on the show.

According to People, January was able to get some juicy gossip about the show. She’d originally said they were just friends when rumors surfaced they were involved. Now, they are friends and last week she was on his podcast The Viall Files. They met to talk about Peter Weber’s first episode. The Mad Men star referenced their dates and that he’d given her inside information. Fans are glad they can remain friends and love that January is so into the show.