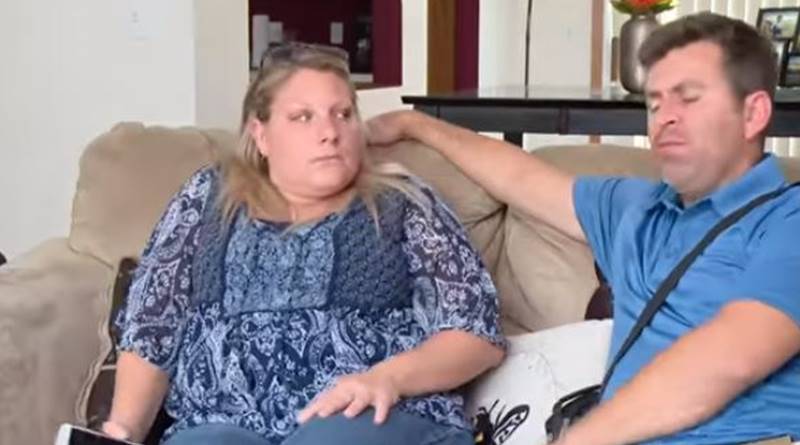 90 Day Fiance fans saw a dramatic and tearful scene as Mursel prepared to leave for Turkey. Allegedly, he’s on his way back to Turkey after he ended up in a hotel. Anna’s super angry that he never wanted to tell his parents about her kids. And he chose their wishes over hers when they demanded he leave her. They both cried after their seemingly ridiculous exchange on the translator app. It’s all over, the TLC show indicates. But is it? Was this all just a fake storyline?

TV Shows Ace reported back in November that there’s a possibility that Mursel returns to Turkey. That was going by Anna’s mother, and other hints dropped by the show previews. But, it might be a load of rubbish. Actually fans know that TLC sometimes bends the lines of a story for the ratings and interest value. The scenes on the couch of Anna freaking about Mursel going looked so genuine that some fans cried. On Instagram, on the @fraudedbytlc account, one fan talked about that. They said that if he never went, then they felt embarrassed for their tears.

Well, Starcasm reported that the couple actually married in September. Plus on his Facebook, Mursel still has his home listed as Nebraska.It actually looked like before he left the departure area, that he might change his mind and go back to Anna.  He had the chance to turn back at the airport and return to her but he didn’t. Or so 90 Day Fiance makes out, anyway. But, it looks like he’s still in the USA. Bear in mind that if he left, he couldn’t just return any old time and carry on, because of his visa.

Mursel celebrates his birthday in the USA

Fraudedbytlc on Instagram shared a screencap of Mursel’s birthday. They captioned it with, “More proof that Mursel didn’t leave the country. Here he is two days ago celebrating his birthday (not his 50th, his 39th, see comments) here in the U.S.” It showed him with Anna and the rest of her family. The caption also mentions his presence at the Tell-All “in late December.”  Naturally, with this kind of intel coming in, fans now think the story’s simply faked.

One fan complained they “Knew it was fake cuz couple weeks ago saw someone posted their marriage license from their county.” Another fan of the show noted, “WHAT was all that crying on the show??? Mursel and @tlc are such liars!!!!!!!!” Then, one 90 Day fiance critic said, “The whole show is fake. Good job TLC 😝😝🤪.” And, others felt that Anna and Mursel were actually hopeless actors.

Many fans express their anger at season 7 of the show. First, they have almost improbable scenes of Tania treating Syngin so badly. Even he said on Instagram she’s not as bad as the show makes out. Now, they see Mursel supposedly back in Turkey and the marriage off. One fan said on the post by defrauded, “It is all BS. I stoped watching this shit show at the begining of this season(SIC)!!”

What do you think? Do believe any of this storyline? Even the translator app that irritates people could have been far better than the one used on the show. Sound off your thoughts in the comments below.