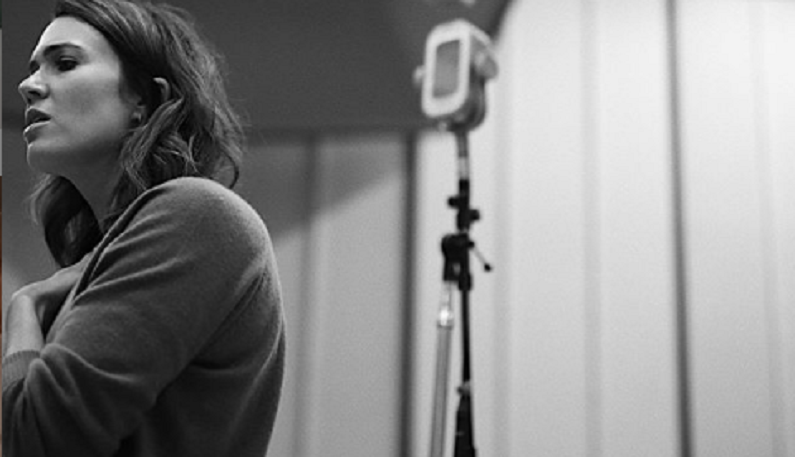 Mandy Moore attended the 2020 Critics’ Choice Awards on Sunday night, Jan. 12. She looked like a stunner in her black jumpsuit and matching cape. The This Is Us star was also hungry at the awards ceremony, which took place in Los Angeles. She was so hungry that she was willing to eat her costar’s meal.

As Us Weekly reported, she couldn’t help but eat some food off costar Jon Huertas’ plate that night. She took to Instagram Stories to document the hilarious incident that went down. The 35-year-old actress told Huertas that his “impossible burger is gonna get eaten” if he doesn’t get back to his seat.

It takes a village. Grateful to my friends who are so very good at what they do (@jennstreicher @streicherhair @kevinmichaelericson @cristinaehrlich @studiounbiased @photobyjennajones ). Grateful to be invited to the party again this year… and giving us a reason to get gussied up! Thanks for having us, @criticschoice!! #thisisus

She was seated with the rest of the This Is Us cast. But Huertas was nowhere to be found when dinner was served. Moore joked that she was going to eat his hamburger. She felt that his meal was fair game since he wasn’t around. Then her friend and Glamour west coast editor Jessica Radloff held up a piece of his hamburger bun.

“Sorry!” the singer said. While Huertas didn’t say anything about his food being stolen, he did share Moore’s clip to his own Instagram Stories. He wanted his fans to know that he was aware of what she was up to. He also filmed a clip of himself enjoying food from Baja Fresh, so he wasn’t too hungry.

Mandy Moore has finally found her own voice

This weekend, the songstress took to Instagram to tease new music. She is going to release her new album, Silver Landings, in March. In an exclusive interview with Billboard, she called her work a confessional.

“I’m not a developed enough songwriter at this juncture of my musical life to know how to write about other things,” she said with a laugh. “I look back at [the younger] version of myself and just want to give her a big hug. I don’t think I really knew what I was in for.”

It’s been over a decade since I’ve hit the road but I am thrilled to put together an intimate, elevated evening of new and old tunes, performed with a superb group of musicians (in fact some are my nearest and dearest). I want the show to have threads of what the writing and recording process was like with this band, almost like you’ve been invited in our living room for an inside glimpse. ⁣ ⁣ It just feels good to be sharing this side of me again. In its purest form. A real side of me I have been itching to put back into the universe. ⁣ ⁣ Tickets will be on sale this Friday at 10 AM local time at mandymoore.lnk.to/Tour.

Since This Is Us made its debut on NBC, she was at a crossroads in her career. She found unexpected success with the television drama, but she wanted to make her return to the music industry since her 2015 divorce from Ryan Adams. She needed a release from her roller coaster marriage. Moore revealed that her love for singing came naturally every time she sang live at a show. She slowly got her feelings when she worked on her songwriting abilities.

‘This Is Us’ star teases Rebecca’s journey

Moore isn’t the only one embarking on a new journey. So is her character, Rebecca. In a new interview, she revealed what helps her get into character as she plays her lead character. From the moment, she transforms into Rebecca, she’s able to play the character at an advanced age. And she’s also been reading plenty of resources.

A flashback and flash-forward in one photo. #fbf #thisisus #nevertoolateforaperfectsmile

“[O]f course it’s something that I have done a lot of research on and something I’ve paid a careful amount of attention to and podcasts and books and documentaries, and I want to thoughtfully approach…what Rebecca is sort of going through at this stage in her life with as much care and consideration,” Moore said, as quoted by SoapHub.

What are your thoughts on Mandy Moore returning to music? Sound off below in the comments section.

This Is Us returns for the second half of the season on Tuesday, Jan. 14 at 9 p.m. on NBC.

Don’t forget to check back with TV Shows Ace for the latest news on This Is Us.