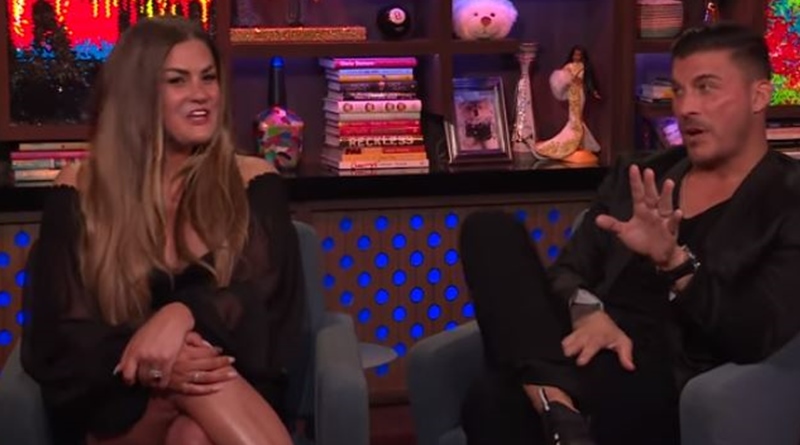 VPR returned on Tuesday on Bravo and once again we saw more about Jax Taylor and Brittany’s wedding. Mainly it concerned Jax and Tom Sandoval getting over their feud following the reunion where we saw Jax having second thoughts about him being his best man. But, the wedding’s long over now, and Jax and Brittany sound very happy together. Now, Jax said that Brittany’s “the best wife.”

Now that Jax and Brittany married, even skeptics think Jax grew up a lot. The couple often posts on their social media. Lots of those posts involve wanting a baby, But, fans heard in a recent Watch What Happens Live, that it might be delayed somewhat. TV Shows Ace reported that Brittany wants to hold off until after Stassi Schroeder’s wedding which is planned for Italy. She and Beau plan their wedding for  October, and Brittany wants to not be pregnant in case she misses it.

Despite rumors that Jax and Brittany weren’t happy after their wedding, they certainly seem like survivors. Reality Blurb reported in July last year, that allegedly, Brittany stressed about Jax cheating on her again. Fans recall that he cheated with Faith Stowers at one stage. But, their social media shows nothing of any conflict between the two. In fact, even though a baby’s on hold for now, the VPR stars still hope for a kid soon. You can see this from the tweet below:

Jax says that Brittany is definitely the ‘best wife’

Brittany certainly seems like an understanding woman, and a wife many guys would hope for. This weekend, Jax tweeted about going out with friends. And, instead of complaining, Brittany seemed fine with it. Jax posted, “When my wife says, “have a good weekend with your friends babe, I love you”…I have the best wife. ✝️💟⛷.” From the emojis, it looks like they went off skiing. Fans reacted to the post and some of them agreed not all women would be so nice about it.

One VPR follower wrote, “What healthy relationships sounds like. Some people don’t know what that is.” Then, another one noted, “@mrjaxtaylor  you are a very lucky guy.@BNCartwright is the best. It’s a southern thing!!” Speaking about the rumors that the Vanderpump Rules couple don’t have a happy marriage one fan mentioned that. They wrote, “Just watched WWHL.. scr*w those ppl who think U & @BNCartwright won’t last. I’ve been watching VPump Rules for years & you’ve never looked happier or at ease as you do now. Stay happy Jax!”

When my wife says, “have a good weekend with your friends babe, I love you”…I have the best wife. ✝️💟⛷ pic.twitter.com/LXVzrCbxiK

What do you think about Jax Taylor saying Brittany’s the “best wife” after she seemed fine with him going off with his friends at the weekend? Do you think the rumors the Bravo couple’s not happy are true? Sound off your thoughts in the comments below.