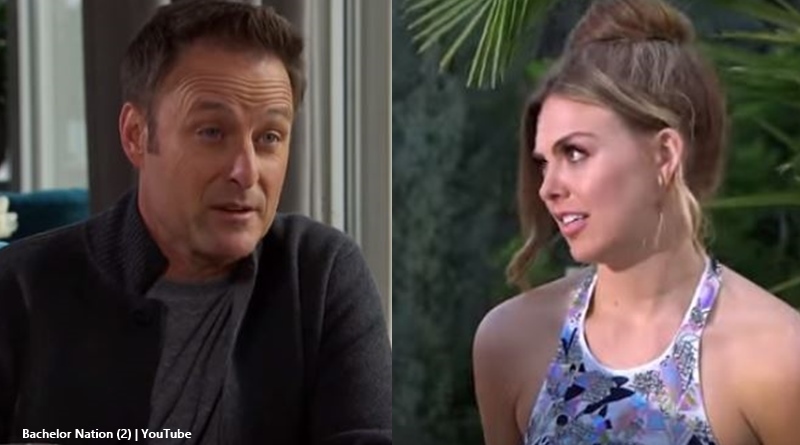 The Bachelor and Bachelorette fans rushed to stand with Hannah B after she slapped at a comment Chris Harrison made on Twitter. It came when he referred to the song about Hannah by Jake Owen. While she didn’t get enraged with Jake, she seems to have had just about enough of Harrison of the Bachelor Nation.

TV Shows Ace reported that Jake Owen wrote a song about Hannah after he saw her return to the franchise on Peter Webers’ season. And, lots of fans have got their thoughts and ideas about it. “Jake Owen has some feelings about her as well,” we wrote. He was inspired to write a country song about Hannah Brown. He debuted the new song on Twitter Live on Thursday, Jan. 9. The episodes showed a rather emotional Hannah. Meanwhile, we also noted that Reality Steve felt she sounded a bit “embarrassed” by it all.

People reported that Hannah really didn’t think that Jake Owen actually trolled on her. But she did post on Twitter, on Thursday night, saying, “Well, this is one way to get a song written about you. This is some catchy shade @jakeowen.” Mind you, she later mentioned that she enjoyed the song. But, it seems The Bachelor star didn’t laugh and joke about Chris Harrison when he shared the song post by Jake.

When Chris Harrison shared the post by Jake, he wrote, “My man @jakeowen speaking his truth to Hannah B on behalf of Peter #TheBachelor.” Hannah B responded with, “Better just be his truth Christopher. I’m not just chop liver now—you still have to love me and try to understand my mess. @chrisbharrison.” Fans liked that she spoke up for herself. A lot of them think that ABC put her through more than she needed to experience as some sort of “commodity” with Peter Weber. Many of them slammed Chris, and also stood by their favorite star.

One Hannah B fan wrote, “Hannah I wished you would see @chrisbharrison only needs you for ratings, then he can’t give you the credit for it. it’s you that is making BORING PETER interesting!!! Wait till after next week, want to bet.” Another The Bachelor follower noted, “THE FORCE IS FEMALE. You got this. We got you. Where have I seen Christopher Harrison’s picture before . . . Oh yeah, in Websters next to the word insensitive.”

Yet more fans stand by Hannah

Many other fans said similar things to Hannah Brown. Here’s a few excerpts from The Bachelor fans on Twitter:

I’m praying for you Hannah. Chris, as someone who appeared to really respect Hannah I’m disappointed! I don’t even know this Jake Owen fellow and I do not wish to! He says he likes Hannah Brown?? I beg to differ. I’d hate to be his enemy. Wow!

What do you think about Hannah B seemingly slapping at Chris Harrison? Are you happy she’s standing up for herself? Sound off your thoughts in the comments below.