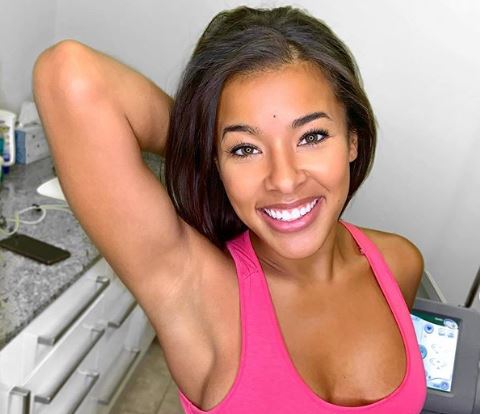 Morgan Lolar and Evan Smith fell in love on Temptation Island. The couple later got engaged and seemed like things were going great. They were on Season 1 and even showed up during Season 2 to let fans know how well they were doing. It was recently revealed that the two split. Now, Morgan is calling him out on her Twitter and accusing him of cheating.

Is it ever okay for an ENGAGED man to leave his fiancé across the country to “work” but actually has nightly sleepovers with 21yo Instagram models? Oh, and his phone happens to “die” every night at the same time. I know, I’m a dumb ass and everyone saw it coming, but me #played

Morgan has a great point if this is what was going on. You have to wonder how long it was going on or how she even found out the details.

Fans didn’t see it coming, though. It really did look like Morgan and Evan had a great thing going. Instead, there were a few things going on that nobody knew about.

When Morgan and Evan met, he was actually dating Kaci Campbell. Of course, Morgan and Kaci weren’t the best of friends after Morgan left Temptation Island with her man. The two are talking back and forth on Twitter now and seem to have fixed their issues. It actually looks like Kaci is being a bit of a shoulder for Morgan to lean on during this rough time.

You already know how I feel about believing him over you from the beginning 💕 https://t.co/2SXyh6GgGG

Right now, it doesn’t look like there is any way that Morgan and Evan will work things out. Evan hasn’t even taken Morgan off of his Instagram yet. Maybe he still has hopes or just isn’t ready to let the world in on what is actually going on in his life.

Tempation Island will be back for Season 3. So far, they have already started casting, but haven’t shared details of exactly when the show will air again. Maybe they will be able to get Morgan and Evan on the show for a short interview about what happened to their relationship.