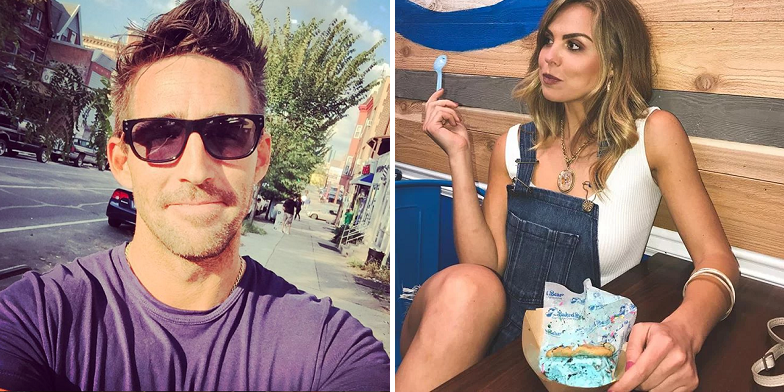 Hannah Brown has been the center of attention lately. The former Bachelorette made an appearance on the season premiere of The Bachelor on Monday night. The sight of her made an emotional effect on her ex-boyfriend, Peter Weber. As TV Shows Ace reported, he almost quit the show to be with her again.

Everyone has their feelings about that moment. Jake Owen has some feelings about her as well. He was inspired to write a country song about Hannah Brown. He debuted the new song on Twitter Live on Thursday, Jan. 9. You have to listen to it for yourself.

He debuted his new song appropriately titled “Alabama Hannah” on Twitter Live. Hannah Brown fans know that’s her beloved nickname. He told fans that the inspiration behind the song was because she can’t escape the limelight. Not only has she appeared on The Bachelorette, but she’s also appeared on Dancing With the Stars and now The Bachelor.

“Everywhere! She just won’t go away,” Owen said. The 38-year-ol revealed that he’s met her before. Bachelor Nation will remember that he performed his song “Made For You” during her one-on-one date with runner-up Tyler Cameron. Owen had nothing bad to say about her during his Twitter Live chat, as reported via E! Online.

“She’s a cool girl,” Owen admitted. “This is not even a dig at the actual Alabama Hannah.” However, the song does include the line, “Alabama Hannah, won’t you go back home.”

He was struck by inspiration on Monday night when he watched Weber reunite with his famous ex on the premiere of The Bachelor. That’s when he “started feeling something for this Peter guy” and had to write a country song about it. That’s when he played the song that talked about Brown’s appearance and Weber’s experience on the first night.

Listen to it for yourself below.

The song also referenced Brown’s pageant beauty past and her latest win on DWTS. When he finished playing the song, Owen admitted that he’s a big fan of hers and that the song is not a “diss on her.” She also wasn’t offended by his new song, as reported via People. But she did call the song “shady.”

“Well, this is one way to get a song written about you,” she tweeted. “This is some catchy shade @jakeowen.”

Well, this is one way to get a song written about you. This is some catchy shade @jakeowen https://t.co/W2QQqOFh0A

She also took to Instagram Stories to praise Owen’s song some more. In a video clip, she called the song “hilarious” and joked that “even though it’s like a diss at me the whole time, I was tapping my foot along to it and laughing.” Brown joked that she would be happy to appear in the new music video.

Is Hannah Brown returning to the mansion?

Will fans get to see even more of her this upcoming season? The “turbulent” season of The Bachelor has already taken flight. Monday night’s three-hour premiere was emotionally exhausting for both fans and contestants alike. As USA Today reported, Weber’s ex-girlfriend is already having second thoughts about letting him go. He admits that he’s very happy to see her.

The two have an emotional heart-to-heart conversation. Brown admits she had feelings for him “After the Final Rose,” and now Weber’s confused. He then tells her that he can’t stop looking at her and he wants to kiss her. Of course, the camera cuts away and fans will have to wait until next week to see what happens.

What are your thoughts on Jake Owen’s new song? Do you think it was a diss toward Hannah Brown? Sound off below in the comments section.

Don’t forget to follow TV Shows Ace for the latest news on The Bachelor.