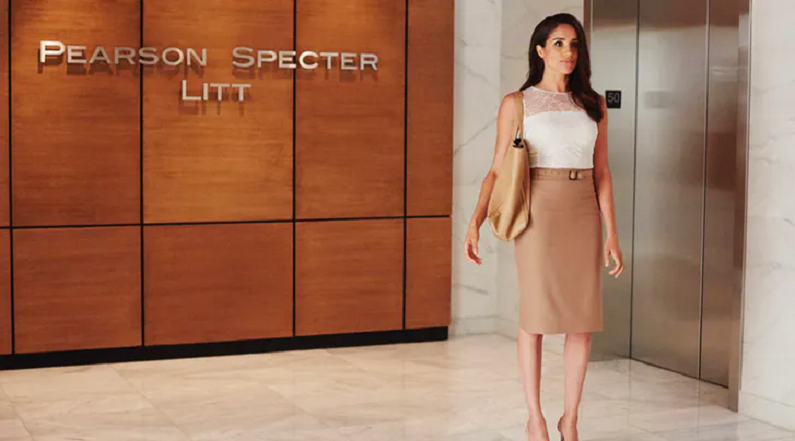 Could a Suits spin-off series happen now that Meghan Markle and Prince Harry have stepped down from their royal duties? Both royal fans and fans of the cancelled series are losing their minds over this news. Royal fans have mixed views on whether the royal couple should’ve notified the queen about their decision. Meanwhile, viewers of the long-running show are demanding a spin-off series with the Duchess of Sussex as the lead.

On Wednesday, Jan. 8, news broke that Meghan Markle and Prince Harry would take a step back from their senior royal duties. This announcement led to a meltdown on social media and a shakeup at Kensington Palace. Royal fans have been arguing over whether this decision was a good idea. But Suits fans are busy demanding a spin-off series with Meghan as the lead.

As reported via PopCulture.tv, the sudden announcement has fans wondering if Meghan could reprise her role of Rachel Zane on the series that aired on USA Network. Most of those fans took to Twitter to ask the network to start working on a spin-off series with Meghan as the lead. They’re hoping that the Duchess will return to her acting career in America.

“With the Duke & Duchess stepping down or whatever, can Meghan Markle go back to Suits?” one fan tweeted.

Now that Meghan Markle is free, does that mean Rachel will be back on Suits? pic.twitter.com/9jDLC1bzdT

Meghan Markle quit back acting in 2018

Shortly after her engagement to Prince Harry, she quit the series. Meghan appeared on the show from 2011 to 2018. In a 2013 interview with Marie Claire, she gushed over how much she loved doing Suits. She also fell in love with her character. Maybe it wouldn’t be too difficult for her to go back to her acting career if the spin-off series were to happen.

“I see Rachel as such a good friend, and when you play a character you love, it’s so much easier,” she said. “I root for her; I’m almost like a fan. If I wasn’t on the show, I would really love this show, because each of the characters are like someone you know.”

The rumors over a Suits spin-off series happened after the couple made the announcement on Instagram. In their latest post, they revealed about the huge change that they’re going through. They made the hard and difficult decision to “step back as senior members of the Royal Family.”

The couple also revealed that they wanted to live financially independent. Though it’s not clear what Prince Harry and Meghan plan to do with their lives. It has been rumored that they will focus more on philanthropy as they balance their time between North America and the U.K. It’s clear that the couple is desperate to escape the British media.

Of course, the queen is not too pleased with the couple’s rash decision. But she no longer has a say on what Meghan can do with her life. So, there is a small chance that a Suits spin-off series could happen.

As reported via The Hollywood Reporter, Pearson drew a smaller crowd than its predecessor. The spin-off series that starred Gina Torres was canceled in November after it aired for a season on the cable network. The decision came after the series ended its 10-episode run. It appears that the Suits franchise is done, but it may not be completely over just yet.

What are your thoughts? Do you think a Suits spin-off series should happen with Meghan Markle as the lead? Sound off below in the comments section.