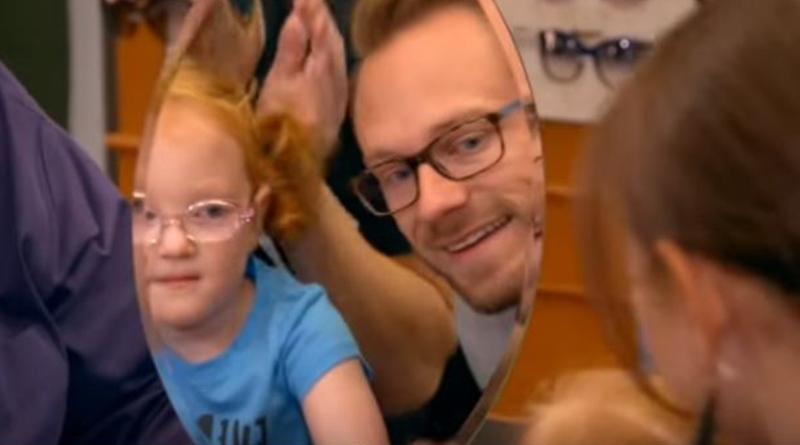 OutDaughtered fans heard in October last year that quint Hazel got some new eyeglasses. But, the girls are growing up, becoming more adventurous, and accidents sometimes happen. Now, her new glasses “bit the dust,” says her Dad Adam. But, fortunately, they had a backup pair of specs.

TV Shows Ace reported in October that Hazel got some new eyeglasses. Of the four-year-old quints, she’s the easiest for fans to pick out as she wore glasses since she was tiny. She’s also a red-head. Fans adore the charming little girl and they root for her because she suffered eye surgery at the age of one-year-old. Hazel suffers from Nystagmus, Cheatsheet reminds viewers.

According to the American Optometric Association, the condition causes “eye-rolling.” Naturally, this causes vision problems. The site notes, “Rarely, surgery is performed to change the position of the muscles that move the eyes.

While this surgery does not cure nystagmus, it may reduce how much a person needs to turn his or her head for better vision.” And, OutDaughtered‘s Hazel already had one surgery. Then, she got new glasses, but they didn’t last very long.

Taking to his Instagram on Wednesday, Adam Busby shared a photo of Hazel wearing pink glasses. Adam captioned his photo with, “Thank God we got a backup pair… big girl glasses bit the dust.” Fans asked Adam how it happened, but he never replied. However, some fans think she looks awfully cute in the pink pair.

OutDaughtered fans left some comments on the photo and the news about the broken eyeglasses. Here’s what some of them said about Hazel:

In the last season of the show, we saw Hazel on her way to the eye specialist. Danielle told her that as she’s four now, she needs to get some “big girl” glasses. She told Hazel, “you’re gonna be cuter than ever.” As the OutDaughtered mom pointed out, they’d be her “first pair of fragile glasses.” The family stressed a bit as the doctor told them that if the new glasses don’t help they might face yet more surgery.

They also hoped that Hazel would be “mature enough to tell [her parents] if the new glasses are helping her or not helping her.” Well, presumably they helped, as fans never heard otherwise.

What do you think about Hazel’s new “big girl” glasses biting “the dust?” She’s very active these days, so a backup pair’s an excellent idea. Sound off your thoughts in the comments below.

‘DOOL’ SHOCKING Two Week Spoilers: EJ & Nicole Date – Johnny Propositions Abby
Duggar Kids Throw Shade At Michelle On Her 55th Birthday
Jessica Batten Of ‘Love Is Blind’ Gets Happily Ever After
Olivia Jade May Be Having A Tough Time In ‘DWTS’ Rehearsal Room
‘Love After Lockup’: Are Kristianna & John Expecting A Baby?