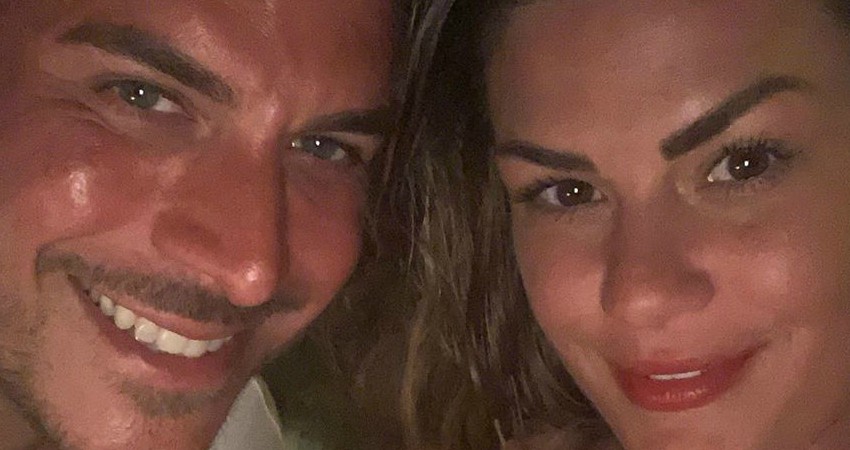 Vanderpump Rules’ new season premiered Tuesday on Bravo. Viewers witnessed the start of the ‘Witches of WeHo’ feud. Kristen Doute is on the outs with former BFFs Katie Maloney-Schwartz and Stassi Schroeder.

We also saw Jax Taylor and Tom Sandoval squash their feud over Tom’s duties at Jax’s wedding. Jax and Brittany Cartwright were married over the summer in Kentucky.

The VPR cameras were there to catch Jax’s Groomzilla antics and the wedding. After having some issues with Tom at the Season 7 reunion, Jax considers revoking his best man duties and demoting him to groomsman.

Cooler heads prevailed and Jax and Tom made up… for now.

Jax and Brittany were the guests Tuesday night after the VPR Season 8 premiere. In fact, the couple briefly attended the premiere party in L.A. for “10 minutes” before jetting off to NYC.

During the show, Andy left no stone unturned. Much of the topic surrounded their summer wedding, including the rapid-fire question segment. People reports some of the questions included best present and worst guest.

Who gave them the best wedding present? (Tom Schwartz and Katie.) Who was the worst guest? (Shep Rose from Southern Charm.)

But the real question on everyone’s mind was – when is Brittany having babies?

During the course of the discussion, Jax revealed that they DID try for a short time after the wedding. However, Jax’s ex and VPR co-star, Stassi Schroeder, got in the way.

“Short version is that we’re trying to make sure we can make it to Italy for Stassi and Beau’s wedding and that I’m not stuck back home because I’m too pregnant. So we’re trying to plan it out.”

However, she assured Andy and fans that she still wants babies. Andy tried to encourage her to get pregnant regardless of Stassi (and Lala Kent’s) upcoming weddings.

Brittany used a plotline from Friends to further explain the change in plans. She said,

I [just] don’t want to be so pregnant where I’m stuck like Phoebe on Friends and can’t go to her best friend’s wedding. That’s what I care about.”

If you didn’t watch Friends, Phoebe missed Ross’s wedding to Rachel – er, Emily – in London because she was pregnant with triplets.

Baby in 2020 is Unlikely for VPR Stars

TV Shows Ace reports that VPR fans are chomping at the bit for a Brittany/Jax baby. However, Stassi’s wedding isn’t until October. That makes it unlikely that fans will get their wish until at least 2021.

However, Lala’s wedding is in April and she has also expressed a desire for kids. In fact, almost every couple on Vanderpump Rules has baby fever, including Stassi.