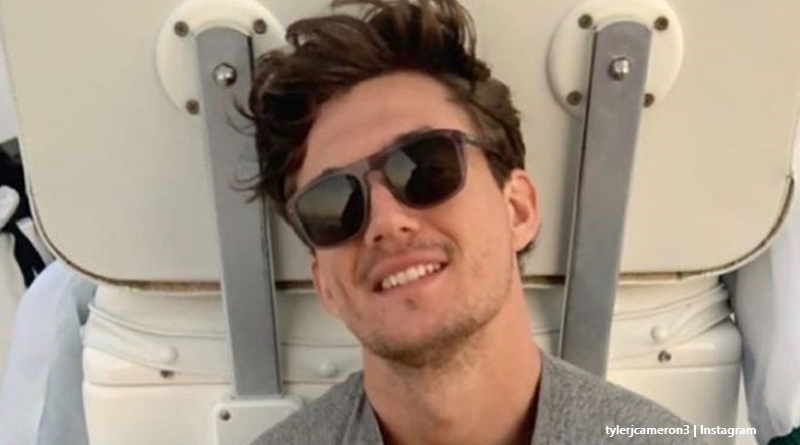 Tyler Cameron didn’t join Hannah Brown and Peter Weber in tear-shedding on the night The Bachelor premiered. In fact, he already got rid of his Hannah B Instagram posts and moved on with his life.  On the night of the premiere, he just posted about how he went fishing and caught a small shark. And, quite a lot of critics slammed him for that.

On his Instagram on Monday night, Tyler shared a couple of pictures of him out fishing. He captioned them with, “All smiles around here. Florida you were good to me. Now it’s back to work.” Plus, he used the hashtag “#CatchAndRelease.” But, critics hate that he catches fish, whether he releases them or not. One of those critics was Destry Spielberg, the daughter of Steven Spielberg and Kate Capshaw. She commented, “I hope you put it back where it belongs 🥺.” Tyler told her “of course” he did.

But other people also chimed in with their feelings on Tyler Cameron’s page. One follower noted, “putting a hook through its mouth is still pretty harmful, even if you throw it back.” Another critic commented, “not cool and pretty f*cked up – sure you released it back but cmon you freaked out an animal for a stupid Instagram photo? 🤦🏼‍♀️” Then came this sentiment, “it suffered for hours on the hook being reeled in and then taken out of the [water].” Similar comments followed, but Tyler ignored them.

All smiles around here. Florida you were good to me. Now it’s back to work. #CatchAndRelease

Tyler moves on, mixes with people other than The Bachelor Nation cast

One fan pointed out that these days Tyler talks to famous people on Instagram. That came after Brittenelle Fredericks commented on his post. Plus, Clay Harbor, the NFL veteran also chipped in to banter with Tyler. Well, Tyler made it clear he’s pretty much moved on from The Bachelorette. He has since dated Gigi Hadid, TV Shows Ace reported. Then he hung out with “Kylie Jenner’s best friend Anastasia “Stassie” Karanikolaou.” Often, we see him chatting with Bravo’s Andy Cohen on his Instagram, as well.

E!News also pointed out that he’s not looking back at The Bachelorette with too many tears. Recall, he was Hannah’s second choice after she dumped Jed Wyatt. Later, she invited him for a date that lasted all night. But days later, he was out with Gigi. In fact, since then, the outlet notes things are “awkward” between them. And, he removed posts about her from his Instagram. Given that he’s more interested in fishing, fans can assume he didn’t watch Peter Weber’s The Bachelor premiere with a box of tissues next to him.

What do you think about Tyler Cameron going fishing? Do you think critics were right to slam him for animal cruelty? Or is he just doing something acceptable to lots of young men? Sound off your thoughts in the comments below.

Remember to check back with TV Shows Ace often for more news about The Bachelorette‘s Tyler Cameron.