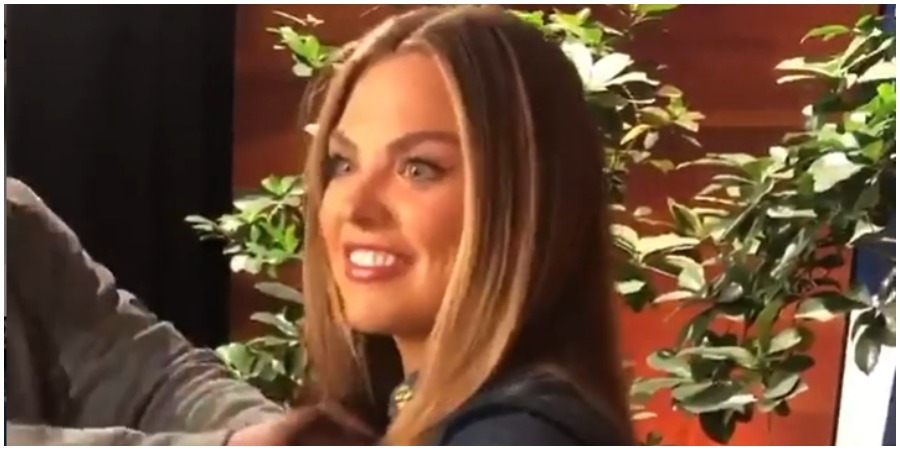 Hannah Brown showed up on the premiere episode of The Bachelor twice and it was emotional. The first time she showed up was to give him the wings he gave her back. Peter had given her the wings when he stepped out to meet her on The Bachelorette. She told him she was really happy for him. Then the night went on with Peter having the time of his life.

Ahead of the episode though Hannah tweeted, “spoiler alerts: this is going to be very freaking awkward.” So, fans knew something else was coming. Hannah followed that with another tweet saying she wanted to go hide under the windmill. Hannah Brown awkwardly recounted the story of the windmill to a group of contestants and Peter Weber on a stage with a windmill.

There is no better way to experience holiday magic than being at @disneyland with your mama wearing matching onesies.

What Did Hannah Brown Say About Her Emotional Return?

It seemed from the first time she showed up to the group date she hosted Hannah Brown had conflicting emotions about Peter. He told her he didn’t want to be her third choice so he moved on. Then he said he was really confused and asked her if she’d come back and live in the house.

Hannah tweeted after the episode aired according to US Weekly. She said, “so that was not a blast at all. It was truly the hardest day—a day I was not looking forward to reliving.”

She went on to thank her fans for being so supportive. A post on Evan Bass Twitter said the appearance for Hannah directly correlated with the week she did poorly on DWTS. Hannah signed off on that as well thanking Alan Bersten for teaching her the rumba after that.

Fans Are As Confused As Peter About Her Melt Down

Fans aren’t sure what Hannah Brown is doing seeing as how she chose another man and then asked the runner-up out after. Peter brought that up and mentioned she’d moved ten minutes away from him and didn’t reach out.

Earlier before the episode aired Hannah had posted on Instagram to Peter, “enjoy the ride. Find your co-pilot. It’s your turn in the captain’s seat Bud.” He replied to thank her. Fans will have to wait to see what happens after Hannah Brown melts down to Peter because the three-hour premiere ended with a To Be Continued title card. Hannah being back and around the girls is sure to bring a lot of drama to the upcoming season.

‘Below Deck Med’: Wait, Is Captain Sandy Yawn Retiring From Yachting?!
Teresa Giudice & Kyle Richards Post Selfie Teasing Peacock’s ‘RHUGT,’ So Why Is Teresa Is Getting All The Attention?
Netflix Anime Movie ‘Drifting Home’: Release Date, What To Expect
Netflix Movie ‘The Killer’ With Michael Fassbender: What We Know So Far
‘Below Deck Med’: Bobby Reveals Season 2 Regret With Hannah