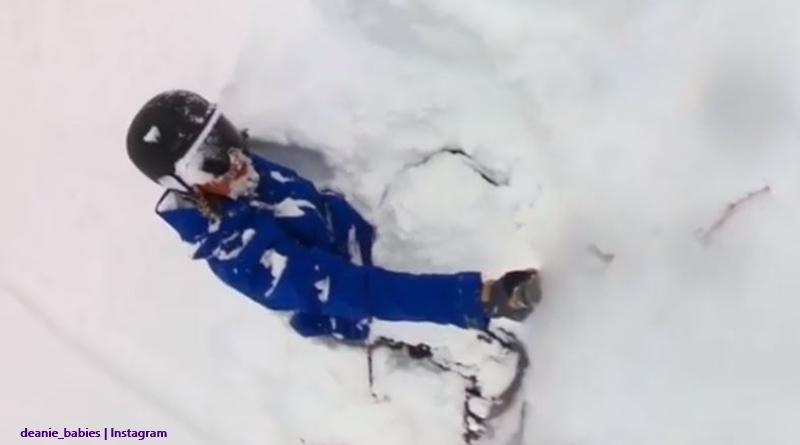 BIP fans heard that Dean Unglert had a skiing accident in Switzerland. He ended up in the hospital with a dislocated hip and a fractured femur. Later discharged from hospital, he and Caelynn Miller-Keyes traveled to Germany by train, and then to London. They awaited the airlines to give the okay on him flying. In the meantime, he shared all the details of how his skiing trip turned into a nightmare.

BIP star gave out more details on his accident

TV Shows Ace reported that when Dean first had his accident, he just shared a picture of himself in the hospital. While fans knew he had an accident and ended up injured, not many details of how it happened came out. We noted that Caelynn went across to Switzerland, and when he left the hospital after his surgery, she was there. The couple had “planned on spending New Year in Germany.” Well, they made it to Frankfurt later, but as Caelynn said, it “wasn’t the NYE we planned.” Nevertheless, she was grateful he made it through the accident.

On Monday, Dean went onto his Instagram to direct his fans to his blog. There, he detailed much more. In fact, he stressed a couple of times, that he had skiing experience in Colorado. But, Switzerland’s a very different story. On his Instagram, the BIP star noted that he didn’t want to write the article, but felt he needed to. He described it as “the blog post i wish i never had to write.”

the blog post i wish i never had to write. recapping my short trip skiing the swiss alps; getting there, the accident, and the aftermath. click the link in my bio to give it a read!

Dean regretted pushing it after nearly a full day of skiing

On his blog, Dean wrote about how he enjoyed his day skiing before a friend met up with him. Initially, he explained, “growing up in the Aspen, Colorado area I’ve grown accustomed to skiing and riding difficult terrain that most people would turn away from. That skiing doesn’t compare to the terrain in Zermatt. The inbounds runs here blew my mind.” So, he took it safely but started getting tired later on.

Dean said that he even plonked himself down for a bit of a rest. Other skiers asked him if he was okay, and he told them he was fine. But, he also noted, maybe he’d done a bit too much for one day. Anyway, he followed the other skiers out through a gap in some trees, and described the run as “amazing! Steep and deep.” the BIP star then “blasted past” the previous skiers. But, visibility and conditions weren’t ideal.

The actual accident came when Dean hit a rock

Dean wrote, “an obstacle came out of nowhere and placed itself right under my skis.” He’d “skied hard into a rock.” But, he didn’t see it because of fresh snowfall. One ski came off and he “knew” he was in trouble. He said his other ski made contact with something as he flew through the air. He actually felt and heard something go wrong with his hip. But, he felt more shaken than anything. The other skiers even stopped, picked up his missing ski, and asked if he was okay.

The BIP star told them he would be okay. But he wasn’t. After they went away he rested a bit more. But when he tried standing he realized something really bad happened. Although he tried calling for rescue, his call seemed treated as if it wasn’t urgent and he never heard from the emergency number again. Getting dark, and cold, eventually, Dean literally crawled his way along, hollering until someone heard him. That person stayed with him until the helicopter came in to take him out as a “storm system was coming in.”

What do you think about Dean’s horrifying accident in Switzerland? He’s very grateful to the person who heard him and became his “knight in shining armor.” After all, with a storm and the dark coming in, potentially, his situation was life-threatening. Sound off your thoughts in the comments below.