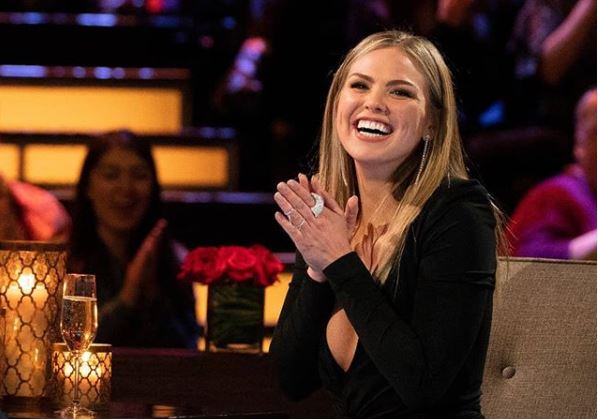 The Bachelor 2020 aired a new episode tonight. This was the first episode of Peter Weber’s season of the show. Hannah Brown showed up and got out of a limo to talk to Peter. She left, but then also showed up again later on. Peter asked her to be part of the show. Now fans want to know if she sticks around.

Hannah Brown was busy while Bachelor was filming

One thing that fans aren’t thinking about is the fact that Hannah Brown was a bit busy while The Bachelor was filming. She was actually doing her own thing and filming Dancing With the Stars. It is not even possible that Hannah would have had time to do both. DWTS airs live and The Bachelor airs a few months later after they have time to edit all of the drama.

Peter Weber was out traveling the world with the girls on the show. At this time, Hannah needed to be in LA to film DWTS. One thing about this show is that it takes hours and hours of preparation. There is no way that Hannah could have fit both in her schedule. Plus, she did amazing and won DWTS.

Could she come back later?

Now, it is possible that Hannah Brown could return to the show later on. Reality Steve normally spoils who wins the season before it even starts airing. This season he has not been able to do that just yet. A twist like Hannah returning could really change things up.

Another option being thrown around is that Peter hasn’t even picked the winner yet. Shows like Survivor don’t announce the winner until the live finale. This makes it a lot easier for spoilers to not get out for the shows. If ABC decided to make a decision like this, then Peter Weber’s final girl might not even know it is her yet. There are a lot of possibilities and fans are just going to have to wait and see how it plays out.

POstables Finally Get Their Wish: New ‘Signed, Sealed, Delivered’ Movie Will Start Filming Soon At Hallmark
Mike Boornazian Teases ‘ILAMB’ Season 2 Again: Has TLC Renewed?!
‘Deadliest Catch’ Captain Keith Colburn: How Is He After Battling Covid?
‘My 600 Lb Life’ Milla Clark: Where Is She Now And How Is She Doing?
YIKES! Ivy Seewald In Least Likely Place Guzzling Out Of A Jug