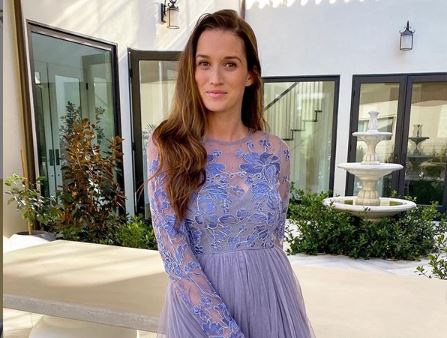 Former Bachelor contestant Jade Roper Tolbert won a million dollars in Fantasy Football this year. Tolbert came in fourth on Chris Soules season. She met her husband Tanner Tolbert on Bachelor in Paradise. The two reportedly both played Fantasy in Draft Kings, but she was the one who won the million.

It turns out that Jade is getting a hard time over the big win, though. Some people feel like she may have cheated to win the big prize. Girls can love football, too.

Jade tweeted, “doesn’t even feel real over here! Officially speechless.” There are some people out their think there was some collusion. For those who don’t play Fantasy Football, collusion is when you work with someone in the league to game the system and beat the others. Some people said since she and her husband both put in one hundred fifty lineups each.

GIVEAWAY CLOSED: congrats to @lil.lady.fee! ✨ Who wants to win $3000?? ✨ Excited to team up with some of my mama blogger friends to gift one lucky follower (YOU!) $3,000 for the holidays! … Open worldwide! Must be following all accounts. Winner will be announced on all our Insta stories (and contacted via DM) on Dec 31th. Good luck! This is in no way sponsored by Instagram. By entering, you confirm you are 13+ years of age, release Instagram of responsibility, and agree to Instagram's terms of use.

More than one person is not allowed to work with another to make sure that you have different teams and can win. Jade and Tanner both submitted the maximum amount of teams allowed per person.

Reality Steve confirmed it on his Twitter. He congratulated her. Steve said, “just know in my 12 team league this year I came in 9th. She beat thousands of people. Don’t ever make fun of fantasy football.”

How is Jade doing now?

Jade Tanner Tolbert and her husband Tanner are doing great. They are married with two children. They recently made a big move out to California. It looks like they are doing great with money now too since Jade just won a million dollars.

Don’t miss watching The Bachelor 2020 with Peter Weber on Monday nights on ABC. Spoilers are already out for this season, but the final winner hasn’t been revealed.