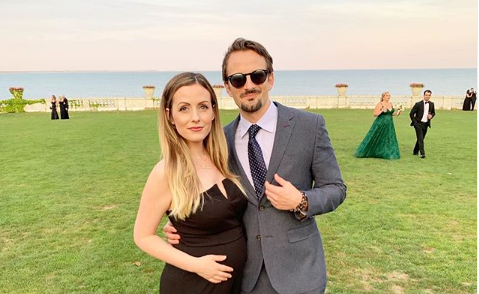 Fans watching The Bachelor tonight got to see the women in the house not only competing with each other for Peter Weber’s love, but with his ex-girlfriend too. Hannah Brown came back and cried all over him telling him how confused she was. Evan Bass is known for calling out producers of the shows that make Bachelor Nation tick. He didn’t hold back after watching the somewhat painful return of Hannah Brown to The Bachelor tonight.

Hannah showed up at the beginning of the episode to return the wings Peter Weber gave her when they met on The Bachelorette. That part was sweet. Then she showed up to do an awkward group date with him and some contestants. This was after he’d already had a great time with the girls on the first group date and a wonderful one-on-one with Madison.

Hannah showed up again for a date where the contestants had to tell a story about a past encounter. It was either a fantasy they had or a story about it. She started the date by telling the story of how many times she and Peter were together in the windmill.

Evan had a behind the scenes look at the shows when he was a contestant. He then met his love on Bachelor in Paradise. Evan Bass tweeted, “I feel so bad for Hannah B. She literally did not read nor realize that her bachelorette contract forced her to show up on #TheBachelor tonight.” Half the people responding felt bad for her and half wanted her to leave Peter alone.

As a dad, my undying quest is to become Clark W Griswold Jr. The lights, torched Christmas tree, and pissed off neighbors – I want IT ALL. @leveretclothing makes it super easy to get all the kids and animals into matching PJs. Click the link in my bio and use code evanspjs for 20% off up to 100 bucks or 25% off over $100. Bella even got matching pjs for her baby doll 🙂 #leveretholidays #ad Disclaimer: any children not pictured were either working, at basketball practice, studying for exams, or a combination of the 3.

Hannah Brown Seems To Be Sticking Around

A preview for the next episode showed Hannah B is still around causing the other girls to be stressed out. A few minutes after the first tweet, Evan Bass said on Twitter, “I did some deep diving and discovered that Hannah’s emotional night DIRECTLY CORRELATES to the night she didn’t get great scores from DWTS.” He said The Bachelor producers have no chill.

It seems having to appear on The Bachelor shook her up. Seeing Peter with multiple women may have caused her to perform poorly on her other show. Hannah went on to win the Mirrorball. It’s going to be interesting to see how this whole thing plays out with Peter. Fans will definitely be watching next Monday for the resolution of that shocking cliffhanger.