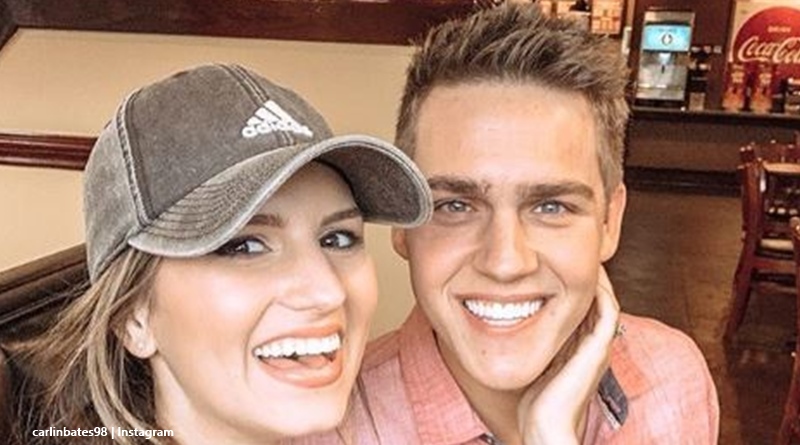 Carlin Bates Stewart counts down the weeks now until their baby Layla Rae arrives. Now, around 33 weeks along, she’s spending as much time alone with Evan as she can. Things will be very different for them once their bundle of joy comes along. She posted about enjoying time playing Mexican Train and eating loads of pizza. And, she shared a happy photo of earlier times on a boat.

Taking to her Instagram on Sunday night, Carlin shared a picture of her and Evan on a boat. They look very much like Leonardo DiCaprio and Kate Winslet in The Titanic. But, she’s not on the boat right now. Carlin captioned her post with, “Spending every second with my favorite @evanpstewart16 before Layla Rae gets here.”

She also explained she’s “Currently not on that boat ⛵️, but I am sitting here in my pjs killing Evan in a game of Mexican train and stuffing my face with pizza… What a life 😎 🍕.” The @Batesfam account commented on the boat picture, “Ok wow! Just wow!!! This pic is soooo beautiful… I want to go to the ocean now!!”

Another fan talked about pizza, and the ocean as well. They noted, “Funny, I’m stuffing my face with pizza while I’m reading about you stuffing your face with pizza. I’d rather be on that boat, though!”

Spending every second with my favorite @evanpstewart16 before Layla Rae gets here. Currently not on that boat ⛵️, but I am sitting here in my pjs killing Evan in a game of Mexican train and stuffing my face with pizza… What a life 😎 🍕#weekendvibes #babymoon

What is Mexican Train?

Plenty of Carlin Bates’ fans wondered what a Mexican Train is. Some followers explained that it’s a sort of dominoes game. And it sounds like jolly good fun. Some fans said they would immediately check it out on the Internet and try the game for themselves. While Carlin awaits her baby, staying inside playing games and eating pizza sounds like a pleasant way to spend a Sunday evening. TV Shows Ace reported that a few weeks ago, she went outside in the snow in her jammies. Not all fans thought that such a good idea at 30 weeks pregnant.

Knox News reminds fans of Bringing Up Bates, that Carlin announced her pregnancy back in September. Their little one’s expected to arrive sometime next month. Super-excited fans track every post that Carlin shares on her journey to motherhood. Most likely, when Layla Rae comes along, they’ll see loads of pictures of the little girl as she grows up. And, of course, they also hope the TV show covers the arrival as well.

After all, UPtv shared abut their wedding on a special last year.

What do you think about Carlin Bates Stewart enjoying Mexican Train and pizza on a chilly Sunday night? That sounds good, but possibly not as good as the trip they took on the boat for their babymoon. Sound off your thoughts in the comments below.

New Photo Of Josh & Anna Duggar’s Son Michael Has Fans Confused
Courtney Rushes Rivers Waldrop To Hospital AGAIN, Is She Alright?!
‘LPBW’ Tori Roloff Opens Up About Miscarriage, Hopes For Another Baby
‘Seeking Sister Wife’ Ashley Snowden Celebrates Father’s Day With Another Man
‘Renovation Island’ Resort: How Much Does It Cost To Stay?