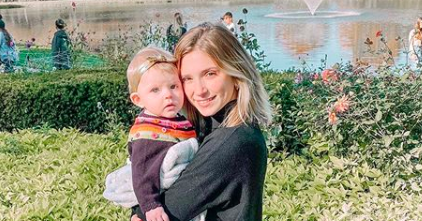 On Sunday afternoon, Unexpected star McKayla Adkins took to her Instagram stories to update her fans. She said that her daughter, Gracelynn, might be needing surgery. She posted these around 2 p.m. EST on Sunday, January 5.

In the first story, she posted a picture of Gracelynn. The teen mom is obviously at the emergency room or hospital with her 11-month-old daughter. She wrote, “Please keep gracelynn in your prayers she might have to have surgery today”.

In the next picture, which was posted a minute later, McKayla shared a picture of her legs and wrote, “I will update more once I know more, she is okay, she has an abscess in a tricky spot and it’s really deep”.

The Unexpected star likely decided to clear things up in that second story so fans knew that it wasn’t anything too serious. Still, surgery can be a big deal. It seems sudden and unplanned, which has to be scary for the young mom-of-two.

Because she posted these pictures on her stories rather than her feed, fans cannot comment publicly. Her followers can reply to her stories with a message, but those messages are not public. Her kids’ dad, Caelan Morrison, has not shared any details about the possible surgery.

A couple hours after the first stories were posted, McKayla went back to her Instagram stories to share more with her followers. One story reads, “Gracelynn gets surgery first thing in the morning. She’s about to get an IV with antibiotics.”

Then, less than an hour later, McKayla added another story. She wrote, “Update: They tried to get an IV 4 times but none worked.. we’re giving her a break and she’s either getting a central line or an IV in the morning before surgery”.

McKayla Adkins frequently uses both Instagram and YouTube to keep fans updated on her life. On Instagram, McKayla typically keeps the comments turned off. She has gotten nasty comments from Unexpected viewers in the past, so she is trying to limit the ones that she sees. Unfortunately, this prevents McKayla from being able to see the positive comments too.

Via social media, she lets fans know what’s going on. For instance, Caelan has been showing up in her YouTube videos and on her Instagram page often. They are currently together. On the show, their tumultuous relationship was on display. So far, things seem to be going well for them.

On YouTube, McKayla gets very candid. She shares a lot of videos that are a little personal. She allows fans to ask her questions too, which also leads to personal questions and answers.

Look out for more updates about McKayla and Gracelynn from TV Shows Ace. Hopefully, McKayla will give fans another update about Gracelynn soon.