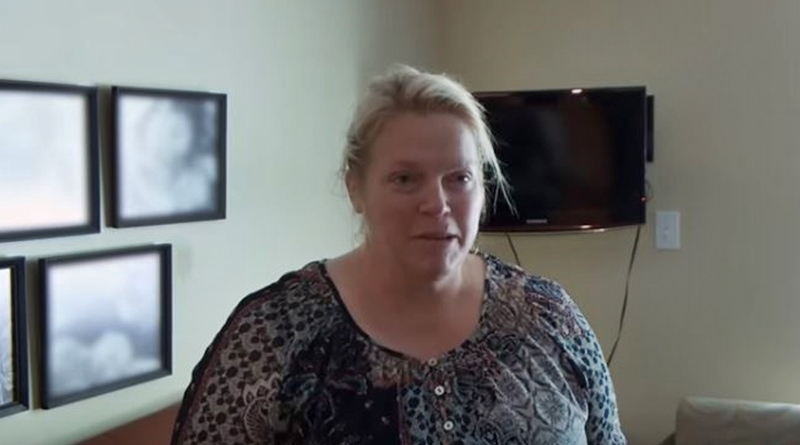 Sister Wives‘ new season arrives tonight (Sunday), and fans can’t wait for it. Fans know that they’ll see some drama which is normal for the TLC show. Janelle Brown shared a reminder about the premiere with her fans on Instagram. And, she grumbled about the picture they used on the poster. The grim-looking family certainly looks very serious.

On Saturday night, Janelle reminded viewers about the upcoming TV show. She shared the poser by TLC, but she’s not happy with the picture. She captioned it with, “join us tomorrow for the season premiere 9/8c @tlc I’ll be live tweeting so join me there if you do that sort of thing 😀 Let’s hang out !” Fans enjoy that they tweet live as it gives them a chance to comment on their own scenes. And, fans interact with their favorite TV stars.

But, in a second comment, Janelle noted, “Unfortunately I can not control the photo they use. These serious ones always seem to turn up lol.” Well, it’s a very serious and grim-looking bunch. Janelle’s dress looks absolutely stunning, some fans think. But, her mouth looks hard and tight. Next to her, Christine looks haughty and a bit icy. Then comes Kody, the patriarch of Sister Wives. Staring aggressively directly at the camera, there’s no trace of a smile under his bearded features.

Even Robyn looks grim in the TLC photo

Robyn sometimes looks a bit smug, fans think. But, this time, she looks unamused and she stands chest to chest with Meri, who looks a bit like she’d like to grin but mustn’t break the mood. She stands strategically between Robyn and Kody, with her back to the man. Does it signify something of an alliance between Meri and Robyn? We’ll need to watch the show to find out. But, in the meantime, fans replied to Janelle’s post.

One Sister Wives fan wrote, “You all have that ‘parent expression’ on your faces, as though you’re asking a question to arrive at what happened-LOL! It’ll be good to see what’s transpired since you all moved.🌸🌞.” Another noted, “they make it look so much worse than it is! So y’all take a serious pic and they make it seem like it’s war within the family.” This probable truth came out as well: “I think they want you to appear not very happy…makes things more interesting…advertising… ploy…to get you to tune in…. to find out what’s going on…”

Join us tomorrow for the season premiere 9/8c @tlc I’ll be live tweeting so join me there if you do that sort of thing 😀 Let’s hang out ! @janellebrown117. #sisterwives #soexcited

TV Shows Ace reported that in the previews for the new season fans see Kody “furious, raging and losing it with the cluster of women. It certainly looks like the Flagstaff move created some mega-fractures between them and Kody.” In fact, he yells at Robyn and tells her to stop defending Meri.

Plus, fans heard from The Hollywood Gossip that the Sister Wives family discovered some residents of Flagstaff are not as laid back as Kody hoped. They complain about the polygamous family living next door. Plus, the show revisits Kody and Meri with their almost eternal wrangling about their relationship. The preview shows them clashing rather than resolving much. Meanwhile, Christine and Janelle stress about finances and the sale of the Las Vegas homes.

So, it’s no huge surprise the family looks so grim in the poster for the new season. What do you think about Janelle grumbling about the serious-looking photo? Do you agree it makes out there’s simply no time for fun in the Brown Family? Sound off your thoughts in the comments below.