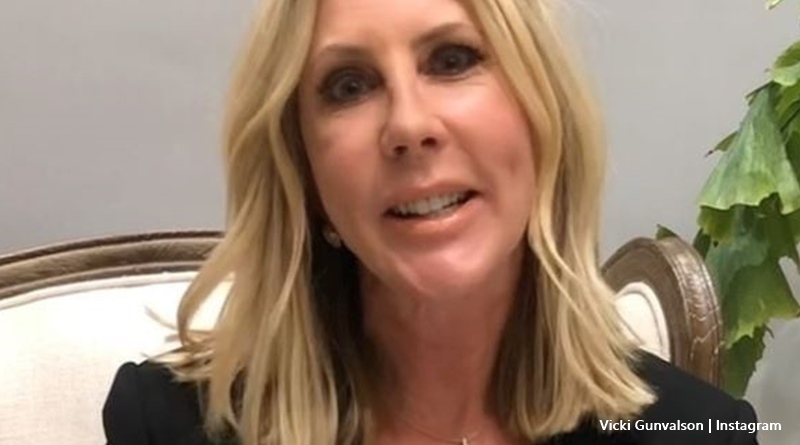 RHOC fans heard that Vicki departed on a cruise at the start of 2020. Ahead of that, she denied being homophobic and went off to enjoy herself. Now, she patiently answered fans, and even trolls on her Instagram as they prepare to return to Los Angeles. And, according to new rumors, they may return to possible bad news for cast members of the Bravo show.

TV Shows Ace reported that Vicki came under fire from critics who accused her of being homophobic. It came after the Reunion, and the next day, the Bravo star saw those posts on social media. Off on her way to a cruise, she took the time to address allegations of homophobia. In her video post, she said that she isn’t homophobic, and noted family and fans she knows who opt for a homosexual lifestyle. In fact, her concern about Braunwynn kissing stemmed from the idea that “making out” on a TV show’s “inappropriate.”

Next thing we knew, she sailed away for her holiday while critics called for her ousting from the show. In the meantime, new rumors arose that possibly Vicki and the rest of the cast could all end up being canned. Radar Online kicked it off with info they allegedly got from an “inside  source.” According to their article, “Bravo execs are considering firing everyone. They don’t want the show to be boring. They’re making the decision now and are going to let the ladies know in a few days.” If true, Vicki faces an even more uncertain future with RHOC after her break.

Vicki answers fans patiently, and yes, even trolls, with class

Taking to Instagram on Friday, Vicki shared that they went up to the bridge on their cruise ship. She captioned it with, “Thank you @princesscruises for inviting @stevelodge_oc and I to the Bridge and to see all the controls of this beautiful ship.” Fans took the opportunity to chat with Vicki, and she replied to many of them with class. The Real Housewives Of Orange County star even replied to trolls with that same classy style.

One fan said to her, “I think we passed you today. We are on Emerald Princess heading southbound out of LA 👋.” Vicki replied, “Yes, you were 4miles out when we were on the bridge.” Then a fan asked, “PLEASE say you are coming back to the [RHOC] show. YOU MADE IT!!!” Vicki just replied with a shrug emoji. Those who wished Vicki well got her gracious “thanks.” But she also took the time to talk to the trolls who slammed on her.

One troll said to Vicki, “I don’t like her! So I’m not going to follow anymore.” Vicki said to them, “Here, let me help you to the door.” Then another troll wrote, “U r too much drama!” Vicki responded with, “Wow, think of that all by yourself? Deep 🙄” When another troll asked her why she thinks “anyone cares” about her life, Vicki answered, “Then why are you following me?”

Thank you @princesscruises for inviting @stevelodge_oc and I to the Bridge and to see all the controls of this beautiful ship. #royalprincess #lastdayatsea #princesscruises⚓️ #happynewyear #whoopitupwithvicki

Actually, Vicki asked a lot of RHOC trolls that question. And, funnily enough, it seemed to stop them from continuing their hateful messages. What do you think about Vicki Gunvalson taking the time out on her cruise to patiently answer questions from fans? And, she even answered a lot of trolls with a lot of class. Sound off your thoughts in the comments below.

Remember to check back with TV Shows Ace often for more news about Vicki Gunvalson and the rest of the cast of Bravo’s RHOC.