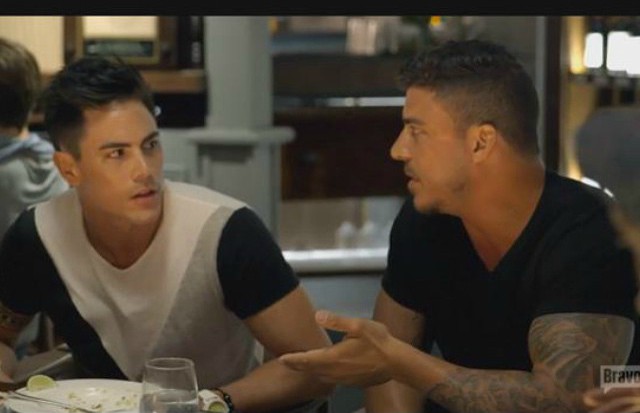 This season of Vanderpump Rules sees unexpected feuds between groups of longtime friends. As TV Shows Ace reports, the “Witches of WeHo” are on the outs. Stassi Schroeder and Katie Maloney-Schwartz aren’t on the best of terms with former BFF Kristen Doute.

The VPR Men of WeHo, Jax Taylor, Tom Sandoval and Tom Schwartz are also not getting along. The beginning of the tension came out during the Season 7 reunion when Jax threatened to take away Sandoval’s best man duties.

Jax ultimately let Sandoval stand up for him at his wedding to Brittany Cartwright.

Was an absolute honor to have these fellas by my side on the best day of my life. I love each and everyone of these guys so much and they have all played a huge role in my life.✝️💟😎 #jaxgotitwright pic: 📷@the_malicotes suits by: @jackvictorstyle eyewear by: @trendsavvyofficial

However, viewers will get a front-row seat to the drama as it unfolds during the upcoming Season 8.

Vanderpump Rules is back on television next week. Bravo is building  the anticipation by releasing teaser clips for fans to watch ahead of Monday’s premiere. The network recently released the first seven minutes, which fans can watch down below.

The newest teaser shows Jax and his now-wife in deep discussion over best man duties at their wedding. Inquisitr reports that Brittany questions whether Sandoval can handle the job.

Earlier in the conversation, VPR‘s Jax complains to her that their friendship is changing, The former model says,

Brittany concedes that yes, it is a big deal and Sandoval should make more of an effort. Jax and Brittany’s Kentucky wedding over the summer will feature heavily in Season 8.

As fans know, Ariana is Sandoval’s longtime girlfriend and the two bought a house earlier this year. In fact, they were the first Vanderpump Rules cast to own their own home.

Married couples Jax and Brittany, as well as Katie and Schwartz, quickly followed suit. Even Kristen got in on the house-buying action and purchased a home for herself. Rumor is that Stassi is closing on a home soon, too.

During his discussion with Ariana, Sandoval rants about Jax only buying a house to “one-up” him. Furthermore, Sandoval confides that Jax touted needing better school districts for buying a pricier house.

As fans know, Ariana is steadfast against having children. In fact, Sandoval cites their plans not to get married or have children as why buying a house was important for strengthening their relationship.

Sandoval and Jax may have made up enough for Jax’s summer wedding, but their friendship is still tense. Jax even recently blocked Sandoval and Ariana on social media.

Jax had a hilarious take on the “new year, new me” cliché. For his New Year’s resolution, Jax vowed to block more people on Twitter.

I vow to block more people this year…🤣🤣🤣 #newyearnewme

The VPR star often blocks his followers for the most minor infraction. Including correcting his typos or spelling errors.

However, most people take being blocked by Jax in stride. For Bravo’s fan convention in November, Ariana had t-shirts made that touted “Blocked By Jax” on the front.

Jax later revealed that Kristen’s clothing line would be selling the t-shirts in the future.