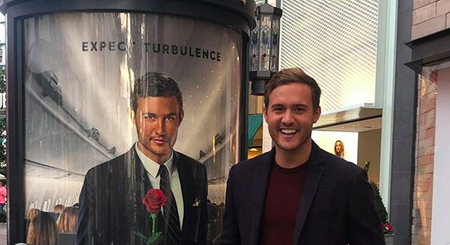 Are you ready for The Bachelor Season 24? The hit ABC reality series is back, with Peter Weber as the new star of the show.

Peter’s story is pretty similar to past seasons: he’s brokenhearted after getting dumped on The Bachelorette and he’s hoping to find love on TV with another 30 women.

The premiere kicks things off with a lot of celebrity cameos. Helping him in the three-hour premiere are Bachelor in Paradise‘s Demi Burnett, country singer Chase Rice, Queer Eye for the Straight Guy alum Carson Kressley, and supermodel Janice Dickinson.

Plus, comedian and actor Fred Willard is returning to the franchise. Willard also appeared during The Bachelorette Season 15 as a guest announcer. Apparently that wasn’t enough crazy for him, because he’s back again to do play by play of what ABC calls “an extreme pillow fight” alongside Chris Harrison.

Exactly how is that going to help Peter find his soulmate? No idea. But for someone who doesn’t want to be defined by his dating choices, he’s putting a lot of them out on national TV.

There’s a major twist in the premiere: the aforementioned Bachelorette Hannah Brown is returning—Bachelor Nation will be wondering, is this just a cameo appearance to spice up the premiere or is she really trying to win back Peter’s heart? After all, she is still looking to find love in 2020.

The network is already hyping up Hannah’s return on TV and Instagram; check out this video of “Hannah Beast” on set. It’d be truly surprising if she becomes the 31st contestant this season; that’s never happened before. Let’s just hope nobody asks her about windmills.

How to watch The Bachelor premiere

The live stream does require you to login using the username and password from your cable TV provider, though, so be sure to have that information on hand before trying to stream.

If you want to watch The Bachelor online without access to ABC, Hulu has episodes after they air. (You will need to be a Hulu subscriber.)

You see him in malls, and soon on your screens! Watch Peter during #TheBachelor premiere on Monday, January 6.

TV Shows Ace will be covering The Bachelor Season 24 all season long. We also have the latest news regarding past Bachelor Nation alumni. Check out our list of the most shocking moments from Bachelor Nation in the 2010’s.

The Bachelor airs Mondays at 8 p.m. ET/PT on ABC.

‘Seeking Sister Wife’: The Winder Family Takes In Creepy New House Guest
Jill Dillard Shows Off Her Garden – Does She Have A Green Thumb?
Julie Chrisley Dishes: Who Is Her Favorite Person To Cook With?
Lauren Burnham Gives Update On Daughter, Shares Huge Surprise For Arie
Ariel Winter Puts Cleavage On Display In Shirt With Plunging Neckline