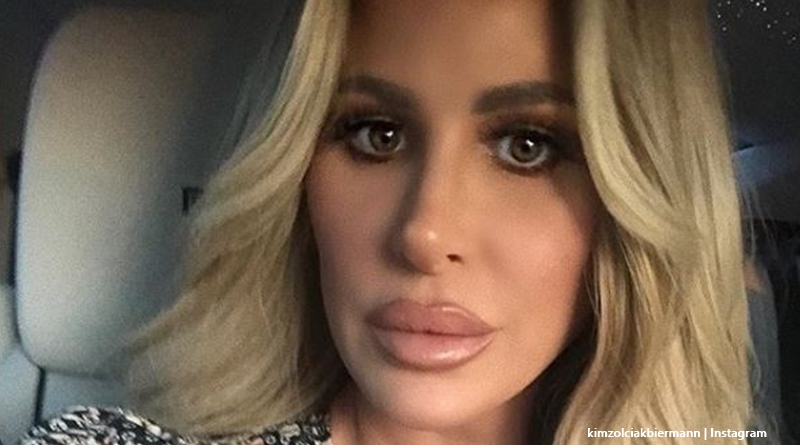 RHOA alum Kim Zolciak hit the tabloid headlines recently for saying that Kenya Moore’s “evil.” The alum of the show got all worked up about Kenya almost ruining Cynthia Bailey’s surprise engagement. But, now she got other things to think about. And, one of those involves her six-year-old son Kane. She says she had some sort of premonition about his go-kart crash.

RHOA got Kim Zolciak worked up, but she soon had other things to worry about

Not long before Christmas, TV Shows Ace reported that Kim and Brielle Biermann went online to talk about Kenya Moore. Well, fans are pretty much used to them complaining about all sorts of things. This time, they dragged on Kenya and Kim called her “evil.” And, to be honest, fans also got angry with Kenya because she almost ruined everything about Cynthia’s surprise party. But, soon after the Christmas holiday, something else hit home for Kim.

Christmas got a lot sadder than sniping at Kenya on the Bravo show. The RHOA alum’s grandma passed away on Christmas morning.  That obviously made the season a sad time for her. Possibly almost as upsetting as the year her son Kash ended up in hospital after being bitten by a dog. And this year, after Christmas, her other son Kane nearly ended up badly hurt. She credits his wearing a helmet and her own premonition, for his safety, Yahoo Entertainment reports.

Merry Christmas from the Biermann’s ❤️ I know I’m late 🙈 but I was really enjoying time with my family and honestly I was pretty exhausted. Sadly on Christmas morning my Grandma passed away😢 I remember always saying to her “Grandma how did you have 6 kids I can’t Imagine!” 😉 she always said, “ There is more than enough love to go around.” She was an incredible woman who had more love in heart then anyone I know ❤️ she will be missed by so many. Grandma I love you and I’ll never forget how you always made me feel so special.❤️

Kane had a bad go-kart accident, Kim had a premonition of sorts

In her series of Instagram stories, Kim said that the boys went off on the go-kart, but she felt something was off. So, she insisted to her hubby Kroy, that “Kane needs to be in the middle between KJ and Kash.” Kim notes that sometimes she’s “intuitive.” And it’s just as well the RHOA star listens to her inner feelings. She may have saved Kane from some really bad injury. She explained, how, “I felt something very strange and I had a dream that he needs to be in the middle.”

Well, it turns out that the go-kart crashed. Kroy rushed over to help and found it completely flipped over. It came after a loud bang, and she started freaking because Kroy started freaking out. “Like Superman” she saw him  “take the entire go-kart and flip it with Kane inside. Kane was upside down.” Well, the heart stopping moment ended okay as Kane wasn’t badly hurt. But, the helmet that protected him was destroyed.

After her scary parenting moment, Kim asked her fans to please always make sure the kids use their helmets. She said, “I want you guys to understand the importance of a helmet whether they’re on a scooter or a bike or a go-kart. It ultimately saved Kane’s life.”

What do you think about Kim Zolciak’s premonition that Kane should go in the middle? Are you glad she insists the kids use their helmets when playing on their go-karts? Sound off your thoughts in the comments below.

Remember to check back with TV Shows Ace often for more news about the cast of Bravo’s RHOA.

Mama June Shannon’s Ex Geno Doak Back In Rehab
Separation Over, Isabel & Jacob Roloff Back Together
‘Top Chef’ Will Continue Filming In Texas Despite Abortion Fight
‘Teen Mom’: Mackenzie Edwards Updates Relationship With Ryan, ‘Turn Your Mess Into A Message’
Chase Chrisley Likens Father Todd To A Tornado, And Here‘s Why