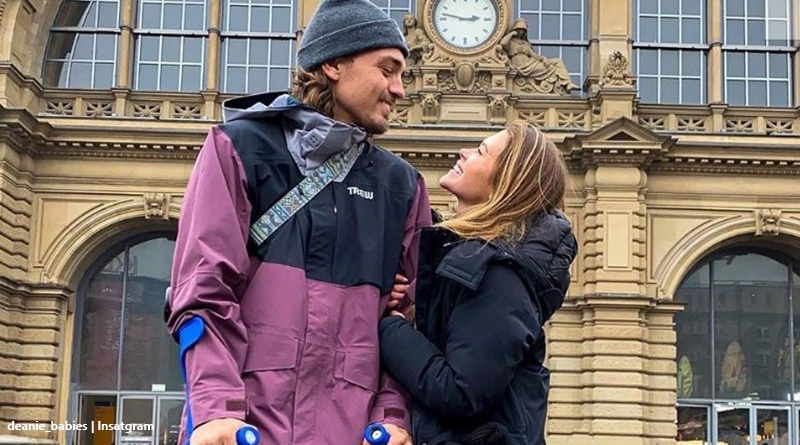 BIP fans heard that Dean Unglert suffered a terrifying accident while skiing in the Swiss Alps. He fell. He broke his femur and dislocated a hip. Caelynn Miller-Keyes wasn’t with him at the time. But, she flew out and reunited with him as he left the hospital. However,  they’re not yet back in the USA. Dean explains why.

TV Shows Ace reported that Dean suffered an accident. And, it might take him months of physio to get back his full health. It meant his Christmas got ruined. Plus, the and Caelynn planned on spending New Year in Germany. Well, they made it to Frankfurt later,  but as Caelynn said, it “wasn’t the NYE we planned.” But she’s just grateful she spent a New Year with him at all. Their original plans all got pushed to the side when he underwent surgery and lay confined in bed.

We reported that Caelynn rushed to his side. And, on December 28, he left the hospital after five days. On his Instagram, he shared a video of himself getting along on two crutches. He captioned that post with, “first steps as a free man after 5 short days in the hospital.” Well, he hobbled along looking really uncomfortable. But, fans liked that he looked on the road to recovery already. And BIP fans hoped he’d soon be home in the USA.

Expecting the Bachelor In Paradise couple to rush back home, fans were a bit surprised when they heard he’s still in Europe. As mentioned, they managed some time in Germany. Cheatsheet noted, “they took the train there from Switzerland.” Dean shared more about that on his Instagram. The outlet saw that a fan sent him a message about that and the BIP star replied.

Dean said,” I’ve been asked this a few times. yesterday Swiss Air deemed me medically unfit to fly to Berlin so now we’re taking trains north until we hit London. He added, “I’ll probably stay in London for a week or two and rest/heal before the long haul back to LA.”  Well, he looks like he’s on the mend already. So hopefully, it won’t be too long until they get back home.

How soon after surgery can Dean fly?

It seems that Dean’s not the only person to undergo surgery and then fail in their efforts to board a plane. According to Alternative Airlines, complications arise that could involve blood clots. That especially applies to surgery on the lower half of the body. They note that “flying after major surgery may be unsafe as passengers may be at risk of infection or deep vein thrombosis (blood clots).” Well, Dean got plates screwed into his fractured femur, which counts as rather big surgery.

While some domestic airlines allow short hops, it could be another two weeks to a month yet before a major airline allows the BIP star to fly home. In the meantime, it looks like Dean and Caelynn simply make the best of things. What do you think about their delay going back to the USA? Did you ever hope to fly and got denied after surgery? Sound off your experiences in the comments below.

Lisa Rinna Sued For Copyright Infringement: What Did She Steal?
How Many Episodes Are In ‘When Calls The Heart’ Season 9?
’90 Day Fiance’ Jovi Dufren’s EXCITING Real Job See Amazing Pics
‘Love Island USA’: Does Javonny Vega Plan To Tell-All On YouTube?!
Lauren Luyendyk Hospitalized Weeks After Giving Birth To Twins