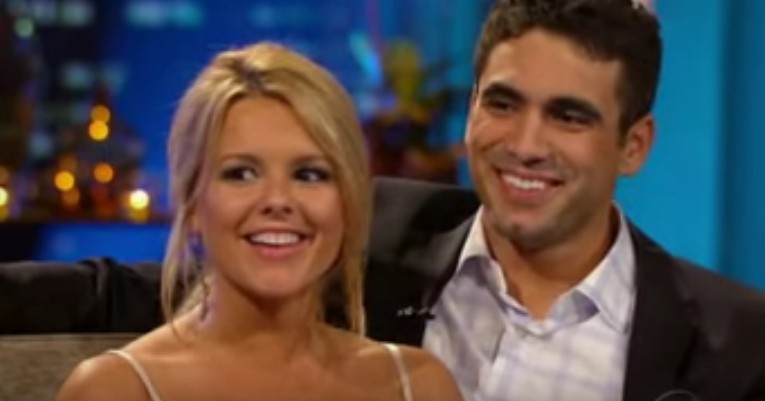 The holidays are a time for reflection, family… and engagements. Bachelorette alum Roberto Martinez recently became one of the celebrity couples celebrating their engagement over the holidays. Days of Our Lives star Greg Vaughan is another star who recently popped the question to his longtime love, actress Angie Harmon.

Bachelorette Star One of The Most Popular Contestants

Roberto was half of one of the most popular Bachelorette couples of all-time. He was chosen by blonde and bubbly Ali Fedotowsky. Ali herself had competed on Season 14 of The Bachelor. However, she wasn’t Jake Pavelka’s final choice.

Ali and Roberto’s courtship on The Bachelorette was basically drama-free. Still, her season is on TV Shows Ace’s Most Shocking Moments due to one suitor’s gigantic tattoo in her honor.

Ali and Roberto were engaged for 18 months following the on-air proposal. They ultimately split in 2011 on good terms.

The State Farm insurance agent surprised his Twitter followers on December 27 by announcing he was engaged again. His new love is Kristiana Elliot. Us Weekly reports that the proposal happened during the couple’s recent vacation.

The announcement was accompanied by a series of photos of their wintery snowboarding adventures. In one photo, the newly-engaged couple snuggle on a chair with Kristiana’s ring on full display.

Roberto captioned the sweet photos, “When you know you know. Found my forever sweetheart.”

When you know you know. Found my forever sweetheart 🙂 pic.twitter.com/SMSxCvdb0U

He didn’t reveal any details about their upcoming wedding, however.

During her appearance on ABC’s Bachelorette reunion earlier this year, Ali shared how she coped with the break-up. She went on a date with former contestant, Frank Neuschaefer.

As fans remember, Frank was one of Ali’s top contenders during Season 6. However, during the location shoot in Tahiti, Frank revealed that he had feelings for his ex. That was the end of their relationship… or so fans thought!

As per tradition, the next lead on The Bachelor, Peter Weber was a contestant on Hannah Brown’s season of The Bachelorette in 2019. While Peter didn’t get the final rose at the end, he did get an unforgettable time in a windmill.

Another contestant told Hannah that he couldn’t stay on the show if she had been intimate with the other men. In response, Hannah confided her windmill encounter with Peter. She later went on to compete and win Season 28 of Dancing With The Stars.