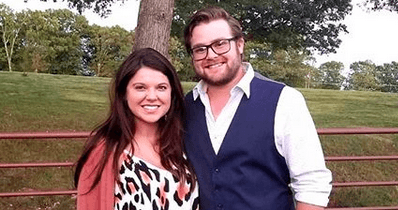 Amy King is often associated with the Duggar family. She is the daughter of Deanna Duggar. Deanna is Jim Bob Duggar’s sister. So, Amy is a cousin of the 19 Kids & Counting and Counting On stars. She’s even referred to with their last name sometimes.

Via social media, Amy shared a new photo of her son, Daxton. She and her husband, Dillon, had their first child in October. Throughout her pregnancy and after his birth, Amy has shared all kinds of sweet updates about him. Fans of the Duggar family also follow Amy and love to hear about her new addition.

Amy King claps back at followers on social media

In the comments section of the new post, one comment read, “All the Duggar babies are gorgeous. Because all the mommas are gorgeous.” In response, Amy wrote, “Thank you but he’s a King baby!”

He's been poppin bottles all day!🎉🍼

It seems that some fans thought that this comment from Amy was rude. Someone wrote, “She might not want to be compared to the duggars which i get….but she digress have duggar blood in her which means her baby does too. …. And let’s be honest here, if it wasnt for the duggar name she wouldn’t be famous. Not trying to be rude just being honest. So no need to be so rude at times about it.”

Amy then said, “I do not consider myself ‘ famous’ that’s just so weird to me! I’m just a girl who’s related to a famous family . I haven’t been on television in years!”

A few other commenters said that Amy used the Duggar family name to help her become famous too. Someone said, “You used the Duggar name & fame when it was convenient for you!!”

In response to all of the drama in the comments, one of Amy’s followers commented, “Oh, this is new. Now we have the genetic police. Get a grip peeps! 😊” Amy replied and left a laughing emoji.

Fortunately, Amy received plenty of support in response. Her fans were quick to defend her. They say that she’s just asking to be her own person outside of the Duggar family. She wants to be recognized for her own life and not the lives of her family members.

Has Amy King been a part of the Duggar family’s shows?

In one of her replies, Amy mentioned that she hasn’t been on TV in years. She has been a part of both 19 Kids & Counting and Counting On. She wasn’t regularly on the shows though. Fans often recognize her from the TLC shows, but the shows weren’t necessarily about her. Dillon and Amy also starred in Season 9 of Marriage Boot Camp: Reality Stars.

Now, Amy is popular on social media. She has 408,000 followers on Instagram. She also owns her own boutique, 3130 Clothing.

What do you think of the debate about Amy being a Duggar? Do you agree with Amy’s comments or the other commenters on social media? Leave a comment below.