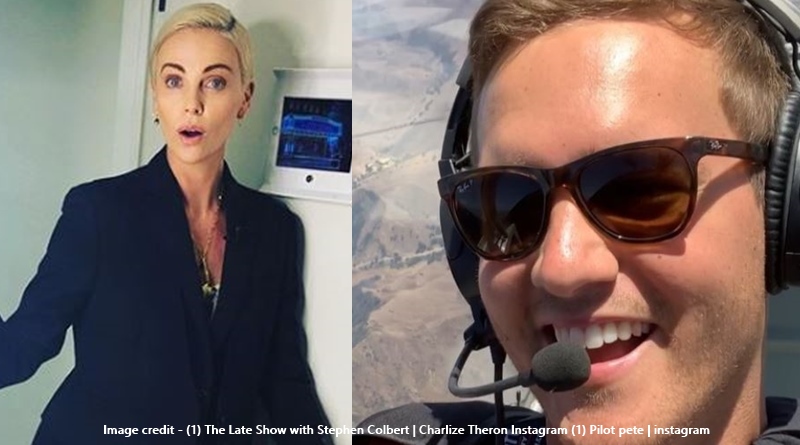 The Bachelor fans agree that 28-year-old Peter Weber’s young, handsome, and charming. Also known as Pilot Pete because he flies planes for a living,  he leaked a hint that the 2020 contestants might beat Hannah Brown’s windmill by joining the “Mile-High Club.” Playing along with the theme, the ads for Peter’s season include  a poster that says, “Expect turbulence.” Now, Charlize Theron flirted about Pilot Pete and his poster. But, she’s 16 years older than him.

TV Shows Ace reported that this season, despite using Hannah Brown’s windmill in a trailer, Peter Weber looks to top it with a mile-high club. We noted that a promo on Twitter said, “He’s not your run of the mill type of guy.” And, that probably led to Peter hinting at more shenanigans with his own contestants. The plane in the trailer also lent credibility to the entrance into the rather “exclusive” club.

Fans know that passengers and aircrew join the club after they engage in intimacy at one mile high in the sky. Even The Bachelor lead, Peter Weber agrees that to this day, it’s a bit of an honor belonging to the club. These days the ABC show’s not shy to show a bit of flesh and some rather raunchy scenes. So, no doubt, envious female fans will get a glimpse of some lucky first-timer enjoying a heady experience. But, it looks like Charlize Theron wouldn’t mind a bit of that herself.

Throughout 2019, rumors that Charlize Theron’s dating Brad Pitt arose. Actually, it’s been nearly a year since the first rumors started, according to The Sun UK. But, probably nothing actually happened. In fact, Charlize got into a number of relationships over the years and none of them ever lasted.  The tragic young girl from a farm near Benoni in South Africa probably never forgot the terrible end to her parents’ relationship.

If you don’t know, long before Charlize became wealthy and famous, and a fan of Pilot Pete on The Bachelor, her dad died in a family altercation. Shot and killed by her mother during his drunken rage, no charges were pressed. But, maybe that put Charlize off permanent relationships. Nevertheless, Pilot Pete’s a bit of alright, she seems to think. Charlize posted about him on her Instagram two days ago. The photo showed Pilot Pete on his poster with the “turbulence” caption. She wrote, “Turbulence I like.”

The Bachelor star, Peter Weber’s a nice young man, fans agree. And, he replied to Charlize on her Instagram post. He told her to, “Buckle up Charlize.” Fans thought it quite funny. After all, Peter was born in 1991. Charlize arrived on the planet in 1975. So, technically, she was of child-bearing age when he was born.

Later, Peter took it a bit further by posting about “turbulence” on his own Instagram. He shared a pic and captioned it with, “Turbulence can be fun.” Fans not in the know about what he was on about got told by other fans to check out the post by Charlize.

The whole thing seems like a bit of fun and banter, and nothing serious at all. But, some fans seemed a bit surprised at Charlize flirting with the younger man. What do you think about it? Sound off your thoughts in the comments below.