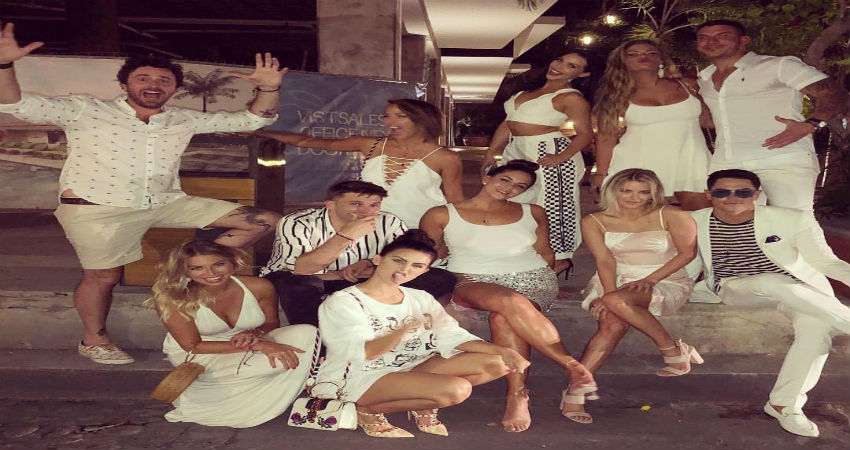 The cast of twenty-somethings may finally be growing up after seven seasons. But back when the show started, the SURvers played musical beds and fought in alleys.

As we move into a new decade, Us Weekly looks back at 10 of the most dramatic moments on Vanderpump Rules.

When Vanderpump Rules premiered back in 2013, Jax Taylor and Stassi Schroeder were dating. Throughout the course of Season 1, Stassi heard rumors that Jax had cheated on her during a trip to Las Vegas.

Jax spent most of Season 1 denying the allegations. He finally admitted the truth during the last episode of the season. The former couple are on friendly terms, despite Jax’s behavior.

Tom Schwartz Gives Katie Maloney A Ring… On a String

Another couple that predates VPR is Tom Schwartz and Katie Maloney. Throughout the early seasons, Katie put the pressure on Schwartz to take their relationship to the next level. At one point, Schwartz gifted Katie with a dog instead of a ring, landing him “in the doghouse.”

Things got worse in Season 3 when Katie thought Schwartz was proposing. However, the ring he was giving her was a promise ring on a string, not an engagement ring.

Taking a cue from Jax, Schwartz once cheated on Katie while in Las Vegas. With this cast, what happens in Vegas never stays there.

Katie’s BFF, Kristen Doute, had her own drama in Season 3. During an argument with a manager at SUR, Kristen told her boss to, “eat a d*ck” in front of a restaurant full of customers.

After much deliberation, Lisa Vanderpump and the other managers decided enough was enough. Kristen was promptly fired from her job at SUR. The Vanderpump Rules cameras caught the staff at SUR celebrating Kristen’s departure.

Despite being fired from SUR, Kristen has remained part of the Vanderpump Rules cast.

Stassi Schroeder’s birthday is the most important day of the year. Or at least, in her opinion, it should be. Unfortunately, Stassi always ends up in a drunken tantrum on her birthday.

During Season 1, Stassi and the gang headed to Vegas for her birthday bash. Jax Taylor and Stassi were on the outs because of the whole cheating thing. Stassi ended up in a meltdown because Jax came to Vegas anyway.

The tradition continued during Season 7. Stassi hosted a birthday party with co-star Ariana Madix. At her 30th birthday party, Stassi freaked out because her boyfriend, Beau Clark, didn’t answer her text messages that it was time to go to bed.

Despite his first taste of Stassi’s birthday meltdowns, Beau later proposed. Viewers will see that during Vanderpump Rules’s upcoming Season 8.

Jax Taylor and Stassi Schroeder briefly reconciled during Season 1. However, the main topic of Season 2 was rumors that Jax cheated on her with Kristen Doute. At the time, Kristen was dating Tom Sandoval.

When Jax confessed that the rumors were true, Stassi took it out on Kristen. The blonde vixen backhanded her former friend.

Kristen and Stassi later mended fences, but they are on the outs once again.

Laura-Leigh Claire Loses It When Jax Taylor Dumps Her

When Jax Taylor and Stassi Schroeder broke up at the beginning of Season 1, Jax moved onto another SURver. Laura-Leigh Claire hooked up several times with Jax in the bathroom at SUR.

Social media wasn’t a thing back in 2013. Bravo TV has a clip of the awkward breakup.

It’s Not About the Pasta on Vanderpump Rules

During a fight, James and Lala start arguing over pasta. James repeatedly yells, “It’s not about the pasta!” Somehow, “pasta” became code-word for cocaine. Perhaps it was the video of James allegedly doing drugs.

In 2015, Jax Taylor and the cast, including, Brittany Cartwright, went to Hawaii on vacation. Toward the end of the trip, Jax found himself in a bit of trouble.

The SUR bartender allegedly stole a pair of sunglasses from a nearby store. His arrest was documented on Vanderpump Rules. He later plead guilty and got a slap on the wrist with probation.

Scheana Shay was the first Vanderpump Rules star to get married on-screen. Her wedding to Mike Shay during Season 3 is where Schwartz presented Katie Maloney with the ring on a string.

By Season 5, the couple were in the process of divorcing.

Vanderpump Rules stars Jax Taylor and Brittany Cartwright tied the knot in her home state of Kentucky in the summer of 2019. The wedding will be heavily featured on the eighth season of the Bravo hit.

Stars Lala Kent and Stassi Schroeder are both engaged and planning weddings in the new year.

Before Jax and Brittany were married, they had their own cheating scandal to work through. During Season 6, Jax admitted to hooking up with SURver Faith Stowers.

The couple briefly split up. However, Jax tragically lost his father. Brittany helped Jax through his grief and the two got back together.

Season 8 of Vanderpump Rules premieres on January 7, 2020 on Bravo. TV Shows Ace looks forward to another decade of the guilty pleasure reality show.

Are Joe & Kendra Duggar At Odds With Jim Bob Because of Josh?
A Big Duggar Announcement Could Be Coming Soon – What Is It?
Victoria & DJ: ‘Dr. Phil’ Features Fearful Mom With Violent 14-Year-Old
Is Kourtney Kardashian Considering Taking Back Scott Disick?
Colton Underwood’s Nana Helps Him Find Love On Tinder – Did She Swipe Right?