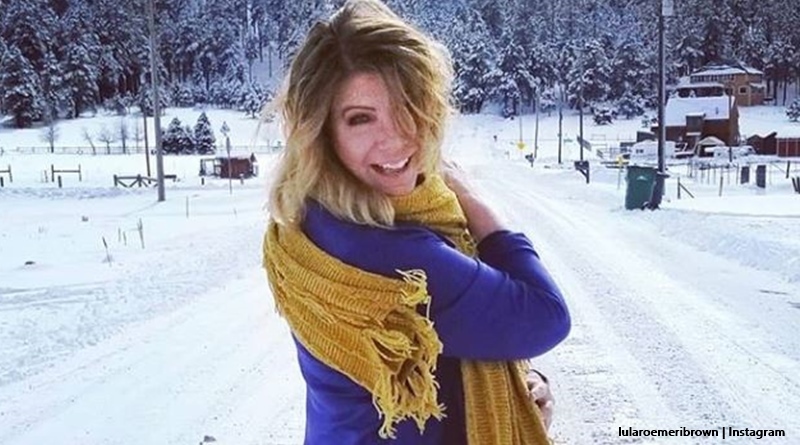 Sister Wives fans heard that the TLC show returns on January 5. In the preview we see Meri and Kody Brown trying once more to work out their relationship. Over the past three years, Meri really seemed to get her life together. And yet, perceptions remain that she’s in some sort of lockdown situation with Kody. Some fans come up with some very odd and amusing things to say to her.

Meri’s got a large fanbase. And, many of those fans seem very young. It’s almost as if they look to her as a mother figure. For other not-so-young-fans, she’s trapped in a situation and they feel deeply that they should give her advice on getting a life. And, others believe that the first wife of Kody’s deeply miserable, desperate to escape the clutches of a polygamous cult and universally hated by the other wives.

So many fans urge her to get a life, but on her Instagram, it’s pretty obvious she already got one. And, it looks like a fulfilling and happy life. In fact, with her LuLaRoe success, good friends, and a large family of kids she adores, why does the myth persist that she’s so desperately unhappy? The show could account for those fans who don’t follow the Sister Wives’ fan-favorite on social media. But, many odd perceptions creep in on her Instagram page.

Fans who don’t follow Meri on social media just go by what they see on the show. We saw Meri agonizing over divorcing Kody for Robyn’s kids. We saw Meri get catfished. Sad and embarrassed Meri emerged. We saw Kodi humiliate her about their relationship on TV. Viewers saw upset Meri when her daughter Mariah came out. And, we saw Meri once more agonize over the catfish thing. Then we saw Meri fighting hard for her B&B.  So, for those fans who only see that side of it, misperceptions are a given fact.

But, the two faces of Meri sometimes seem so widely diverse, it’s hard to marry them up to the often tear-stained face we see on TV. On Instagram, we see an independent and empowered woman. Three years ago, she started with LuLaRoe. Today, she travels widely, grew a huge network of friends and colleagues, and runs her B&B. Inspirational, and mostly happy posts fill her Stories and page. Vivacious, smiling, and only occasionally philosophical, we see the Sister Wives‘ star blooming. But, some fans just don’t get it. And some comments are either really odd or very amusing.

Meri under lockdown? One fan’s perception

TV Shows Ace reported that Janelle shared about the family joining Christine’s daughter Gwen for some fun on the Polar Express. Gwen served them as “their chef.” On Meri’s Stories, she also shared about their fun outing after Christmas. But, when she shared another pic of her smiling and enjoying her Saturday, one fan responded with, “I’m glad you got out. Beautiful n love the snow.” Well, no wonder Meri replied with, “Got out?? 🤔.” Almost like she escaped from the back bedroom while Kody picked at his left-over turkey.

When Meri attended her friend Blair’s Christmas party, one fan said, “Omg Meri You are on fire🔥! You look so beautiful! MER if I were you I would keep on keeping on…Life is a blink of and eye…Enjoy yourself..laugh..stay up all hours..just have fun❤️❤️.” Bear in mind, this was said to someone who just spent five wonderful days partying, shopping, and getting out with friends. It certainly sounds like she’s already laughing, having fun, and enjoying herself.

Another epic whirlwind weekend in the books! Sometimes you just gotta fly out of town for a fun holiday party and stay up till all hours of the night…. Because you can….. Thank you gentlemen for the invite! 🎄🎄🎄 #LivingMyWhy #BecauseICan #LifeFulfilled #LifeIsAnAdventure #ChristmasParty #HolidaySeason #Friends @blairmichael12

Meri as the coolest sister wife – an amusing backhanded compliment

Fans of the show know that Meri enjoys her large and loving family. While the wives sometimes clash, that’s standard. It’s not like Janelle, Robyn, and Christine sit around plotting her downfall every day. So often, Meri shares about the fun times at home with the smaller kids. In fact, she’s close to Robyn’s little ones. While some fans urge Meri to “run,” and “break free,” others hope she wins the personality contest between the wives for Kody’s affections.

One fan said to Meri back in November, “Meri i wish ud just try red hair colour…..ur eyes would be brighter and i just think it would b amazing….it would take yrs away too and take u to the coolest s.wife status.” Well, for someone who looks pretty already, that’s a bit of a backhanded compliment. Like she’s so old and haggard she could use a facelift or something. And, it presumes that Meri’s desperate to regain number one wife status. Actually, in real life, it seems Meri’s got other bigger ambitions than being the biggest in the Sister Wives’ playpen.

What do you think about this small selection of odd and amusing comments by fans of Sister Wives? Do you think there are some strange perceptions of Kody’s wife going around? Well, Cheatsheet reminds us we see a lot of Meri in the next season. And, it’s likey to fuel those misperceptions even more. So, maybe bear in mind that Meri in real life is not always the same Meri we see on television. Sound off your thoughts in the comments below.