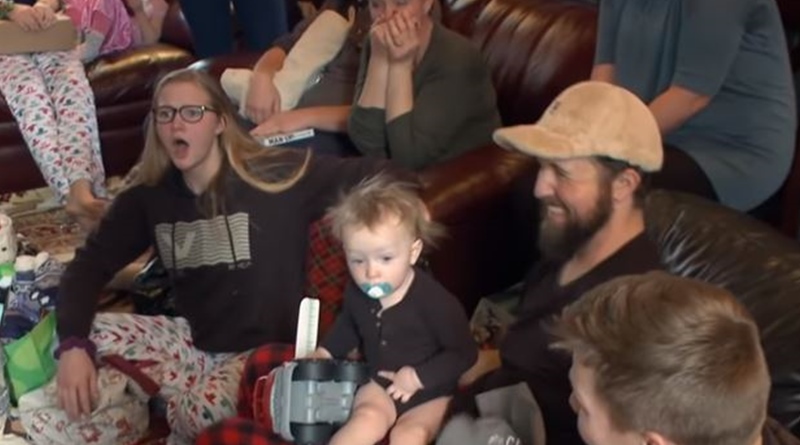 Sister Wives fans last heard from Maddie Brown Brush at the beginning of December. Ahead of Christmas, she shared a rather sad post about the loss of their family dog. Quiet over most of the month, the mom of Evie-K and her son Axel finally shared about their Christmas. A funny photo showing Santa got fans trading their Santa stories with Maddie.

2019 brought some ups and downs for Maddie Brush. One high moment for Maddie came after Evie-K’s birth. Delightedly, she took to Instagram to share an early milestone with her new baby. TV Shows Ace reported that before she hit three months old, Evie managed to turn over by herself. And, not just back to front, but front to back, as well. That special moment must mean a lot to Maddie, as her child suffers from limb malformation.

People broke the news to the public that Maddie’s daughter was born with FATCO. The genetic condition means that she’s missing some fingers and has incomplete leg bones. That setback obviously brought some distress for Maddie and her husband Caleb. But, now they just celebrated their first Christmas with their daughter. And, it’s clear that Evie-K’s much loved by the Sister Wives‘ family. Maddie shared about when she got to meet Santa.

Axel Brush is just over two years old now. But, being a big brother doesn’t necessarily mean he’s the bravest of the two kids. In a funny post, Maddie shared a picture of Axel looking really miserable and on the edge of tears. Meanwhile, his sister looked bright as a button. Santa held Evie-K, while Axel looked intent on escape as soon as possible. The poor little fellow’s not a happy little boy at all with scary Santa.

Maddie captioned it with, “I know its late and Christmas is over, but in case you wanted to know how our Santa photos went. 😂.” It seemed that not even his little green truck could take Axel’s mind off the scary situation. Well, many Sister Wives fans know that nearly every child cries the first few times they meet Santa. Some of them felt that no family album’s complete without the tearful and miserable kiddies hating on the big-bearded person down at the mall. So, they started trading their own stories about kids and Santa.

Maddie’s certainly not alone with unhappy kids at Christmas. One fan said, “You will look back at these and laugh ❤️. I have one of my daughter screaming with Santa.” Another Sister Wives fan noted, “When my oldest boy was younger, we thought he was terrified of Santa. Turns out he was scared of the huge Christmas trees at the mall. 🌲😂😂.”

Yet another fan related, “Just like my youngest daughter for 3 years. Then she caught onto the candy cane After the picture. 🤣.” One story involved reads, “When they took my grandchildren to see Santa my granddaughter was afraid. They put the girls in Santa’s chair and Santa hid behind the chair. When they snapped the picture Santa popped his head out from the back.” Other fans told Maddie that next year, Evie-K probably cries, while Axel tells Santa all about what he wants for Christmas. Certainly, it seems like Santa and kids’ crying is about as much a part of the tradition as opening presents on Christmas morning.

I know its late and Christmas is over, but in case you wanted to know how our Santa photos went. 😂

What did you think about the picture of Axel looking totally unhappy with meeting Santa? Like, Maddie, do you have photos of the kids looking seriously unhappy about the meetup? Sound off your thoughts in the comments below.