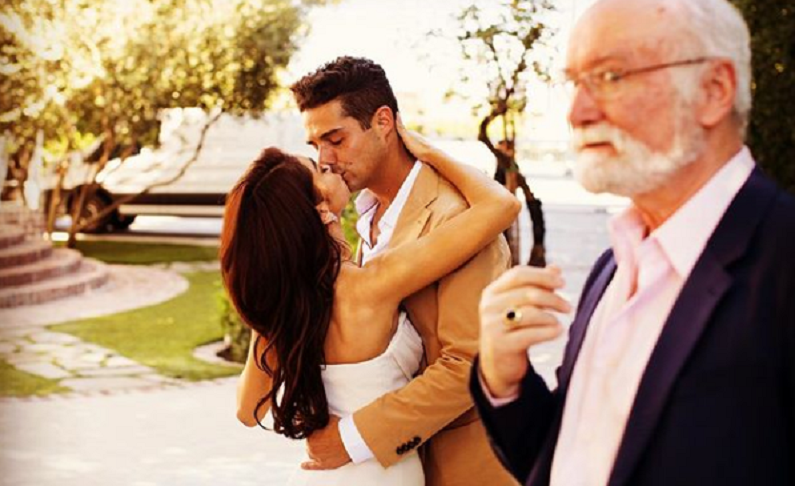 Sarah Hyland and Wells Adams are very open about their feelings about each other. This makes some people uncomfortable. But fans of the Bachelor in Paradise and Modern Family stars think it’s adorable. As TV Shows Ace reported, fans were conflicted over a controversial photo of Adams grabbing Hyland’s breast. That hasn’t stopped the couple for showing how they really feel about each other.

The two aren’t shy about sharing their feelings. Ever since they started dating two years ago, they have been packing on the PDA on and off Instagram. Some would say it’s inappropriate, especially around the holiday season. Hyland shared a photo of the two spending their first Christmas together as an engaged couple, according to Seventeen.

“Third Christmas with you but first one engaged,” Hyland wrote. “You’d think we’d know how to make a proper picture at this point.”

Third Christmas with you but first one engaged. You’d think we’d know how to take a proper picture at this point 🎄💍💕

The photo shows the actress wearing a black curve-hugging dress. Meanwhile, Adams is seen wearing a blue Game of Thrones “Winter is Coming” holiday sweater. The couple looks lovingly into each other’s eyes. In another shot, the couple gives the camera a big smile.

They decided to turn this opportunity into an online flirting session. Wells wrote, “My dire wolf really loves breast meat apparently…” underneath Hyland’s photo. She took their brief flirting session up a notch with her comment: “@wellsadams I apologize for there not being enough meat to feed your Wolf.”

Wells also shared holiday photos on his Instagram page. In the photo, the couple is wearing matching Christmas pajamas as they cuddle their dogs.

Flirtatious couple makes out in public

Their flirty online banter comes after they were spotted making out at a local farmer’s market, as reported by Daily Mail. The two looked more in love than ever if it’s even possible. On Sunday, Dec. 23, Hyland and Adams wore matching mustard tops as they held hands down the street. The stars couldn’t stop smiling as they browsed the booths. They also stole many kisses during their shopping trip.

The couple is obviously young and in love. They’re just enjoying their engagement. However, that hasn’t stopped some fans from wanting them to turn it down a notch. Some people get annoyed even if the couple is flirting on their own Instagram accounts.

What are your thoughts on Sarah Hyland and Wells Adams’ PDA? Do you agree that it’s too much? Or, do you think it’s cute. Sound off below in the comments section. Don’t forget to check back with TV Shows Ace for more news on the stars of Bachelor in Paradise and Modern Family.