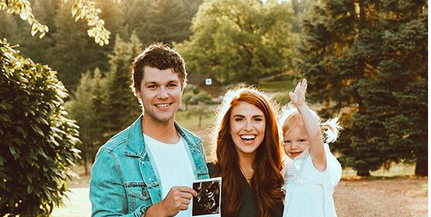 When you try for that matching family pj self-timer pic… 😜I hope your having a cozy Christmas Eve🎄 As we are listening to Christmas music this lyric struck me tonight from Oh Come Oh Come Emmanuel✨⁣⁣ ⁣ ⁣ “…O come, O King of nations, bind⁣⁣ in one the hearts of all mankind.⁣⁣ Bid all our sad divisions cease⁣⁣ and be yourself our King of Peace.”

Fans of the TLC family love to see the updates that the family members share. Both Audrey and Tori share a lot of photos of their kids, along with details about their kids’ lives.

It’s unclear what provoked Jeremy to ask a question about social media, but it turned out to be an important one. On social media, Jeremy shared a picture of himself with his daughter, Ember.

In his caption, he said, “I’ve been wondering lately how our kids will feel when they are our age and there are already thousands of photos of themselves on the internet. Will they not care, or will they wish we gave them the choice? In either case, the internet truly is in its infancy and there is so, so much we don’t know about it’s long term affect.”

He also asked LPBW fans to share their thoughts. It seems that Jeremy wanted to get some other opinions on social media and sharing pictures of his kids. Based on the response he received, fans seem to be on the same page as Jeremy. It seems that plenty of parents have had these same considerations as Jeremy.

I’ve been wondering lately how our kids will feel when they are our age and there are already thousands of photos of themselves on the internet. Will they not care, or will they wish we gave them the choice? In either case, the internet truly is in its infancy and there is so, so much we don’t know about it’s long term affect. What are your thoughts?

In response to Jeremy’s question, fans of the TLC show had a lot to say. Some of them feel that Instagram and other forms of social media are like photo albums. They see social media as a collection of photos.

Other commenters shared that they think it’s important to ask children (or anyone else) about posting a picture before doing it. A couple of people in the comments said that this is difficult, especially because young children have no concept of social media. They might just agree without knowing what their parents or family members mean.

Will Jeremy and Audrey be a part of the show?

Earlier this year, Matt shared that the show is filming again. Fans of LPBW can hope to see new episodes in the spring of 2020, but an exact premiere date has yet to be announced.

As of right now, it’s unlikely that Jeremy and Audrey will be returning to the show. They announced that they were leaving the show in July 2018. In their announcement, they shared that they would still be supporting their family who remained a part of the show. They also promised not to disappear. They know how important they are to fans of the show.

Could there be a chance that the couple was trying to keep Ember out of the spotlight? Based on his recent question, it’s possible there’s a connection.

Even though Jeremy and Audrey have left the show, they continue to keep fans updated. They post often on social media. Zach and Tori remain a part of the show.

What do you think of Jeremy’s question? Do you have any input? Leave a comment below.

‘OutDaughtered’ Fans Think Adam Busby Just Made A Big Mistake
Does ‘Seinfeld’ Have A Netflix Release Date Yet? When To Expect It
A Denim Jacket And Roll Call Has Fans Sure Jana Duggar’s Engaged
Netflix Reveals If It Will Save ‘Manifest’ From Cancelation
‘Below Deck’ Baby Boom? This ‘Sailing Yacht’ Star Is Also Pregnant!