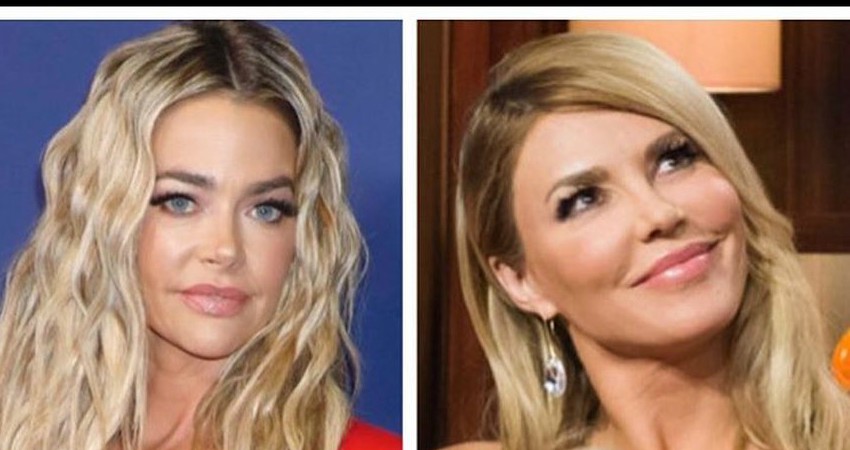 The Real Housewives of Beverly Hills lost star Lisa Vanderpump during Season 9 of the Bravo hit show. Now it seems the remaining stars will do whatever it takes to keep the drama going for the upcoming 10th season.

Hollywood Life reports that Kyle Richards and the other women planned to target Denise Richards the way they targeted Lisa Vanderpump.

Lisa Rinna received a lot of backlash over her recent comments on one of Denise’s Instagram posts.

Earlier this month, Denise shared a series of photos that revealed a medical crisis the actress has been dealing with. In one photo, Denise is in a hospital gown before or after she had surgery to repair four hernias.

Many fans and celebrities offered well wishes and a speedy recovery. Fellow actress Lisa chose the moment to call Denise out for missing a cast party at co-star Dorit Kemsley’s home.

In a second comment, Lisa wrote, “Is everything ok? Is everyone ok?”

Speculation has been circling for weeks that tensions ran high on The Real Housewives of Beverly Hills due to Denise’s busy schedule. TV Shows Ace reports that Denise is considering leaving the show to focus on her acting career.

Lisa’s comments didn’t help matters, as two other co-stars got involved in the feud. Camille Grammer defended Denise. She tweeted,

“Denise did not quit #rhobh and Rinna you throw your friend under a bus. How about calling her to see how she’s Doing and stop tweeting about it.”

Denise did not quit #rhobh and Rinna you throw your friend under a bus. How about calling her to see how she’s Doing and stop tweeting about it.

While Denise remained above the fray, recurring RHOBH star Brandi Glanville did not.

She called Camille out for her hypocrisy in tweeting about her issues with Lisa’s comment instead of speaking to her directly.

“Ive been asked not to get involved and i won’t but I have sooooo many things to say about A certain someone tweeting at certain other person to get off Twitter… R U serious !!!!!”

Ive been asked not to get involved and i won’t but I have sooooo many things to say about A certain someone tweeting at certain other person to get off Twitter…R U serious !!!!! Pot call kettle

Hollywood Life reports Denise’s popularity during her first season is what the Housewives dislike about her now.

Denise was an immediate hit with viewers due to her down-to-earth personality. The Wild Things actress went toe-to-toe with Camille several times throughout the season.

Along with Brandi, Camille will return in a part-time role for Season 10. According to sources, Kyle let it slip to Brandi about the target on Denise’s back.

“Brandi called Denise early in the season because Kyle [Richards] had told Brandi that Denise was going to be the one person that the other ladies picked on this season in Lisa Vanderpump‘s absence.”

As viewers recall, Brandi’s appearance on Season 9 was meeting Denise for drinks. The two bonded over their failed marriages that played out in the public’s eye.

The two seemingly left on good terms, which is why Brandi reportedly reached out to Denise.

“Brandi came to Denise because they met through a mutual friend during season 9. Brandi really empathized with Denise and everything that she went through in her past, so she called to warn her about her conversation with Kyle.”

Twitter offers Brandi a direct line to fans and she is not afraid to use it. Brandi recently confided in her followers that she suspected she had been drugged.

After worrying her fans, Brandi tweeted the next morning that she was feeling fine.

The former model also used her Twitter account to share gossip stories about RHOBH. However, instead of tweeting the story about the feud, she denied it entirely.

“I’m just gonna say that neither Kyle nor Denise (RICHARDS)has ever said a negative word to me about one another LIES !!!”

I’m just gonna say that neither Kyle nor Denise (RICHARDS)has ever said a negative word to me about one another LIES !!! And Merry Christmas Eve

Fans will have to tune in to Season 10 to find out who is telling the truth and who is stirring up drama. The Real Housewives of Beverly Hills returns to Bravo in early 2020.

YIKES! Ivy Seewald In Least Likely Place Guzzling Out Of A Jug
Dr. Now Shares A Key Factor In Reversing Obesity: What Is It?
‘Bachelorette’ Cody Menk: What Exactly Is A Zipper Sales Manager?
Loren Brovarnik Gets ’90 Day Fiance’ Fans Raving About Her Style
Danielle Busby Has Mixed Feelings As She Leaves Blayke Behind?