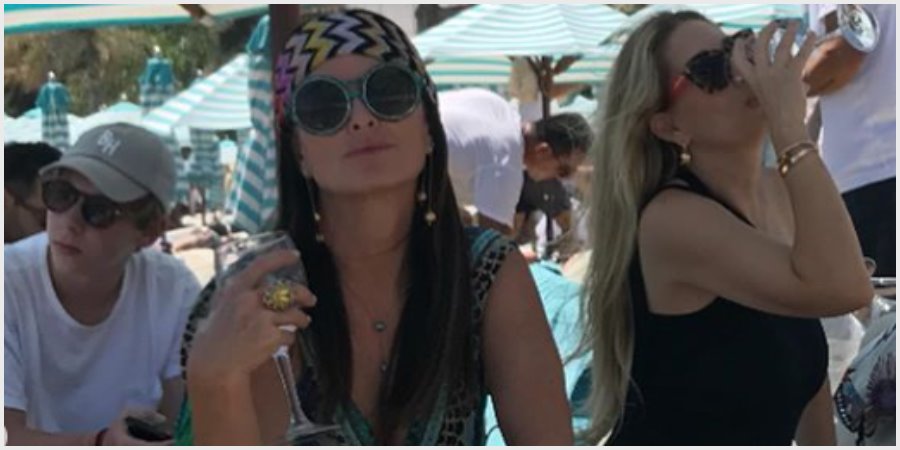 Kyle Richards of RHOBH is taking to social media to set the record straight. There’s been some talk about her feuding with Denise Richards throughout the new season. This was mostly fueled by the rumors out there Denise didn’t want to film and wasn’t getting along with others.

Kyle has been called the Beverly Hills queen by Andy Cohen and others since the exit of Lisa Vanderpump. She isn’t taking this story lying down and wanted to let fans know she’s not the one stirring the pot, this time.

Is Kyle Richards Just Trying To Cause Drama?

Kyle Richards posted on Instagram under a news story about her and Denise that it was untrue. She said the cast had no plans to take down anyone. Brandi Glanville’s name got called into it and she’s one former housewife who doesn’t care who she offends. She tells it like it is and openly feuds with people, especially former and current housewives.

A source said, “Brandi called Denise early in the season because Kyle Richards had told Brandi Denise would be the one person that the other ladies picked on this season in LVP‘s absence.” The source also said, they would use everything the fans liked about Denise against her.

Brandi Glanville Says No Way The Rumors Are True

In addition to Kyle Richards denying the reports of a group takedown, Brandi Glanville also posted to let people know the truth. She said, “I’m just gonna say that neither Kyle nor Denise has ever said a negative word to me about one another LIES!”

Denise Richards got very publicly called out by Lisa Rinna on Instagram after she didn’t tape the finale. Lisa posted, “Denise are you ok? You never showed up to Dorit’s Sat night we were all so worried about you. What happened?” Denise didn’t respond according to Reality Blurb but Camille Grammar did. She shamed Lisa for making a feud with Denise public in such a way.

Rinna said she reached out to Denise privately as well, but she knows how to get attention. It is possible she posted it on social media to get as much attention as possible. There have been some people saying the new season is lackluster. As Housewives fans know, most rumors have to start with a little truth so the new season with Kyle Richards should be interesting.